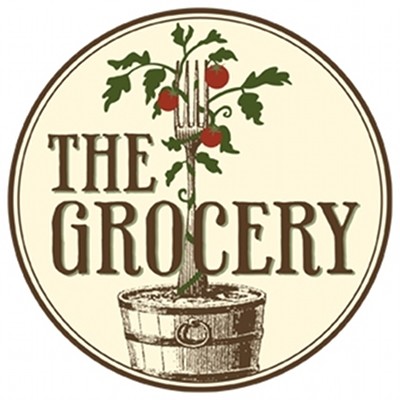 Update January 27: After dining at Kevin Johnson's restaurant earlier this week, it is my pleasure to give The Grocery two enthusiastic thumbs up.

Let's start with what stands out on "snacks" section of the menu. Let me note, before I dive in, that while the rest of the menu incorporates mediterranean and international flare, the small bites are strikingly Southern - and delicious.

The Grocery boasts house-made charcuterie (pictured below), which can be found on the menu as the "Piggy Plate." Served up cheekily on a cutting board in the shape of a grinning pig, it is accompanied by whole grain mustard, pickles and small crisps of toast. For the liver lovers out there, the Chicken Liver Mousse with Onion Apricot Jam and Toast is a must. It was creamy, rich, sweet and buttery - a spreadable heaven if you will. The ultimate nod to Southern cuisine comes in the form of Crispy Pimento Cheese balls. These bite-sized morsel come fried to a beautiful golden-brown on the outside and offer a warm, gooey Pimento surprise on the insider. Naturally, the fried cheese was gobbled up in approximately 5 seconds flat.

Instead of ordering individual entrees, the table was served "family style" portions. Self-described as a restaurant that focueses on Ingredient driven cuisine, allowing each person to serve themselves and sample multiple dishes is the way to go at The Grocery. The portions easily serve four people and are reasonably priced at around $36. The star of the evening was the ‘Cassoulet’ of Keegan-Filion Pork Shank with Sausage, Shoulder, White Beans and Greens (pictured below). The locally sourced pork melts in your mouth while the white beans were rich and seasoned so beautifully that they could have been a meal in themselves. The sausage is so soft you can cut it easily with your fork, and, like the beans, seasoned to perfect.

As for sides, be sure to get at least one for the table. I would recommend sampling the Cauliflower Casserole, which unlike some cauliflower dishes, isn't served as a mushy mess. The cauliflower is the focal point of the side and Johnson makes sure it is firm, crisped on top by cheese, and a large enough portion for three people to share. If you're hankering for a green, go with the Brussels Sprouts with Bacon, Apples and Pecans. The Brussels are meaty, the bacon is savory, the apples add a hint of sweetness and the pecans add a surprise crunch into every other bite.

In addition to dinner, Johnson informed us that in two short weeks, The Grocery will be start doing Sunday Brunch. No word on the price points or official menu yet, but it is bound for greatness.

Update December 28: The Grocery is officially open at 4 Cannon Street and is serving dinner, Tuesday through Saturday, beginning at 5 p.m.

In addition to a seasonal menu with Mediterranean and Southern influences, The Grocery boasts house-made charcuterie, a canning program, craft beer on tap, specialty cocktails, and extensive wine list and a complimentary parking in the Cannon Street lot.

Johnson began his career in Charleston at Slightly North of Broad (S.N.O.B.) while attending the esteemed culinary institute, Johnson & Wales University, Charleston. After graduation in 1996, he returned home to northern Virginia and worked as sous chef for three years at The Inn at Little Washington. In 2003, he returned to Charleston to serve as executive chef at Anson Restaurant for seven years. Johnson most recently was executive chef at REV Foods, which operates Taco Boy, Closed for Business, Poe’s Tavern and Monza, and has also been a culinary instructor at Trident Technical College since Fall 2010.

At The Grocery, Johnson will serve seasonal, ingredient-inspired cuisine with Mediterranean and Southern influences. The Grocery will evoke memories of groceries past through a menu dictated by what is available from local and regional farmers and fishermen. Johnson’s sustainable approach to stocking his kitchen will be evident through his relationships with farmers and fishermen, house-made charcuterie and an in-house canning program.

Johnson’s menu will support sustainable fishing practices and help to preserve the harvest through a canning program that will be displayed in the restaurant. Diners are encouraged to sample the continually evolving menu by enjoying several small or large plates that can be shared for a communal dining experience. Menu highlights include roasted capers Inlet oysters with bacon-onion marmalade and mignonette; cassoulet of Keegan-Filion pork; and triggerfish with roasted cauliflower, Marcona almonds and caper-raisin sauce.

The Charleston City Paper has a bit more on The Grocery; read it here.