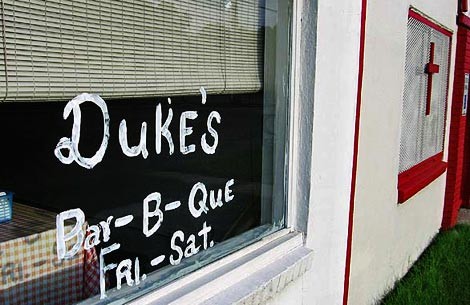 Image by T. Dunn/ Huggingthecoast.comImage by 20080829dukes.jpg A non-fussy exterior is nearly always a must for good BBQ.

If you can't make it the delicious BBQ at Boone Hall Plantation on Sunday, or, heck, you might still want to go anyways: Every Friday and Saturday you can head over to Duke's Bar-B-Que for tasty, simple goodness.

T. Dunn/ Huggingthecoast.com
Some folks don't care for hash, but I've always just suspected they're mad because they don't have taste buds.Doug DuCap of Hugging the Coast recently reminded his readers of that:
Duke’s Bar-B-Que is that increasingly rare thing: the traditional, neighborhood barbeque joint. A place that knows its customers. A place beyond the reach of that artificially flavored world of food fashions and focus groups. A place with an elemental purity and, in the truest sense of the word, refinement. Duke’s figured out a long, long time ago what it was put on this earth to do and has kept on doing it the same way for 56 years.

The range of offerings is shockingly minimal by today’s standards, but it’s all you could want: pork barbeque, rice, hash, cole slaw, pickles (sweet and dill), crispy pork skin, sauces, sweet tea, Sunbeam bread, a few desserts. And that’s it.

Duke's is located at 4428 Spruill Avenue in North Charleston.

They're open evenings on Friday's and Saturday's only, head over to Hugging the Coast for more details and pictures.