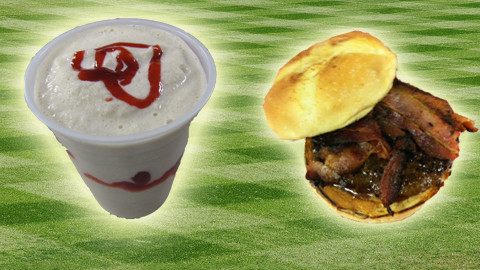 The Charleston RiverDogs have long prided themselves on unusual food offerings at their basesball games (see this Man v. Food clip), and they're keeping it up with beer shakes, and peanut butter and pepper jelly, jalapeno bacon burger and more.

The RiverDogs Food & Beverage department traveled to fairs, circuses, and other events all over the state searching for inspiration and ideas for new items to offer at The Joe this year.

"With the addition of Josh Shea as our new F&B Director, we've been able to raise the bar of expectation and increase our food exploration," said John Schumacher, the food guru for the RiverDogs' ownership ensemble, The Goldklang Group.

The RiverDogs will transform the former Nacho House to a Taco House (appropriately called "Wacko Taco"). Because of its popularity, the club will continue to offer the well-known Kitchen Sink Nachos, which fittingly includes everything in the concession stand (but the kitchen sink). The taco menu will highlight a Chipotle chicken, beef or pulled pork taco that features locally-made pulled pork from Sticky Fingers Restaurant. The two headlining items are a Charlie T(aco) Dog, which includes a soft and hard taco with a hot dog, mustard BBQ sauce and a cole slaw filling.

For the other featured taco, the team will unveil the MUSC Urban Farm Veggie Taco, as the RiverDogs partner with the Medical University of South Carolina that recently started an urban garden in downtown Charleston. Fresh vegetables and herbs that will be utilized in the tacos at Riley Park will be harvested for each homestand.

Beer Shakes make their debut this year and will be available in three distinct flavors – Palmetto Espresso Porter Chocolate (from a local brewery), Guinness Caramel and Sweetwater 420 Strawberry.

One item that is sure to become a hit is the new Peanut Butter & Pepper Jelly, Jalapeno Bacon Burger that will be more than a mouthful. Also, the snack menu will be enhanced with the new freshly fried Pork Rinds and Pork Cracklins, that can go with (or without) deep fried peanuts in sea salt or BBQ flavor.

Introduced last year to a rousing success was the Sausage World stand that will continue to offer the alligator, brat and duck sausages, in addition a succulent chicken and apple-flavored sausage has also been added.

Another addition is Moonshine Margaritas to the established Tiki Hut and will feature locally-made flavored moonshines (peach and cherry) from Firefly Distillery. The ball club will also highlight, as another local addition, a beer called Pig Swig that was created by Piggly Wiggly.

Last but certainly not least, there is a newcomer on the menu for youngsters visiting The Joe this year as well. The new Kid's Meal will feature a slice of Little Caesars Pizza, a bag of trail mix, and a juice box.

Season tickets, mini-plans, group opportunities, and individual game tickets are currently on sale for the RiverDogs' 2013 season. The home portion of the schedule begins April 11 with a seven-game homestand that features the Augusta GreenJackets and the Rome Braves. For more information, please contact the Riley Park Box Office at 843/577-DOGS (3647) or online at www.riverdogs.com.