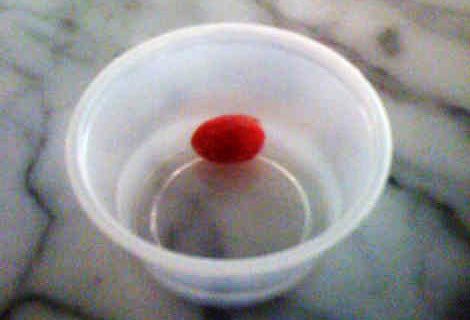 I don't like to have my God-given senses screwed with by mere mortals, so it's safe to say that I was nothing less than apprehensive about eating an unknown berry from a country that I've never been to, all so I can experience an hour or so of taste-bud-altering insanity.

Read more stories on this subject in our miracle fruit topic page.But I begrudgingly ate the small red "miracle fruit."

My fears were quelled the moment Chef Jason Ulak asked us to take a generous bite of the lemon and lime wedges that were strategically placed at each of the five tables.

Now, I've never been the kind of person to go head first into unfamiliar territory, so I waited until one of my tablemates went first as if I was certain that the sliced citrus was poisoned. "It's so sweet!" the lovely, middle-aged woman sitting across from me said. "Try it! Go on! Try it!"

I bit into the fruit and my world was immediately turned on its head. Bitter foods suddenly became ultra sweet! Limes, lemons and pickled veggies were all like eating morsels of candy and treats without the slightest hint of guilt. Dry wines became extra velvety and fruity. They even served us Sweetwater IPA samples which lost its hoppy tinge and was replaced with straight sugar.

Everyone in attendance was equally thrilled, if not more so. Even though it was a more intimate setting with about 17 or so in attendance, the entire restaurant was abuzz with the laughter of participant and the chatter of those merely on the sidelines. One couple giggled at each other with delight when we were asked to try a combination of goat cheese tartlettes and chocolate-covered strawberries-by far, my top foods of the night.

All in all, it was an awesome experience that I implore everyone -- if you didn't attend this or the tripping session that Guerilla Cuisine had a few months ago -- to try out. You won't be disappointed in the least.