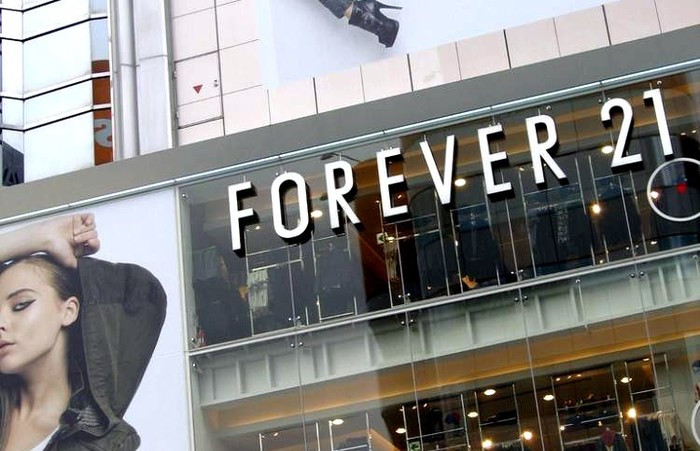 Image by Flickr user jpellgen Not the spot in question, but you get the idea.

Update January 19, video: Remember how we just mentioned Sarah Jones' video site "All Over It"?

Well apparently this editor was slack thoroughly reading here site as I totally missed the fun video Jones did of the opening day at Forever 21 on King Street and its long, long line that managed to wrap down the block and back up to the near front of the build (yes, that's longer than the Apple Store's line.

At any rate, take a gander:

And while the weather is less chilly than it has been, it's still less than thoroughly enjoyable to stand outside the whole time. As of 2 p.m. there was still a hearty waiting line for the store that opened up at 10 a.m.

Even the dressing rooms were sporting 45 minute wait times.

Local designer Alesya was on the scene and has posted photos of the new store, the line, and the Starbucks aftermath; take a gander here.

Also ABC News 4 was there and has a newsy video report.

Update January 7, open in one week: The opening date has been narrowed to next Saturday, January 15.

They'll be opening at 10 a.m. and have giveaways for the first 400 — this may be the biggest cluster you-know-what on King Street since the Apple store opened.

Both The Post and Courier and Charleston City Paper have write-up, but the City Paper was first to press so I'll point you there for details.

Once again, the store is at 211 King Street.

Update December 29, coming in January: If you've been eagerly awaiting the opening of Forever 21 in Charleston, it looks like they're finally getting near a date.

Mid-January 2011. Which is just after the holiday spending surge — ouch.

Live 5 News has a short report with a few scant details.

And if you missed the news, Tanger outlets in North Charleston is gaining a Saks Off Fifth and American Eagle Outfitters.

First reporting: As though you didn't already think everyone in Charleston dressed alike: Forever 21 is set to open at the end of 2010 in Charleston.

And, yes, that location (33,000 square feet) just happens to be the same spot as the Saks Fifth Avenue location, which will be closing. The Saks closure will affect some 60 employees and is slated to close by July 17.

The store will be at 211 King Street at the corner of Market Street. Presently the closest Forever 21 location to Charleston is in Savannah, 83 miles away.

Press release fresh meat is below:

Forever 21, the Los Angeles based fast fashion retailer known for offering the latest trend-setting merchandise at great value, is pleased to announce the opening of their first location in South Carolina. The retailer is set to open at the end of 2010 in a new 33,000 square foot Charleston location in the former Saks Fifth Avenue space at the Majestic Square shopping district. Forever 21 is pleased to be expanding their business into South Carolina, with Charleston being an ideal location to launch the opening of their first store. Forever 21 Executive Vice President Larry Meyer shares in this excitement and says, “We are very pleased to have the opportunity to expand our business into Charleston and offer the latest fashion to the local community. Additionally, we expect to create up to 150 new jobs at the Charleston location for the local community.”

In addition to Forever 21 apparel and accessories, the store will encompass five brands, including Twelve by Twelve, a couture-like aspiration line designed exclusively for Forever 21; Heritage 1981, a lifestyle brand for women; 21MEN, a line of fresh, fast fashion for men of all ages; Love 21, a contemporary line for women; and HTG81, a kids line for boys and girls ages six to fourteen. The new location will service all local Charleston customers with the perfect mix of merchandise and serve as a one-stop-shop for their personal, professional and family lifestyle fashion needs.

Forever 21, Inc., headquartered in Los Angeles, is a specialty retailer of women’s, men’s and children’s clothing and accessories, known for offering the hottest and most current fashion trends at a great value to consumers. Forever 21’s model of fast fashion works by keeping the store exciting with fresh merchandise offerings brought in daily. The retailer operates over 480 stores in the United States, with international operations in Canada, Puerto Rico, Korea and Japan. For more information please visit:

Update May 18: Yes, the talk of the town has been about what the arrival of Forever 21 will or won't do to King Street, but The Post and Courier has done a nice piece about the departure of Saks Fifth Avenue.

It's both a walk through the store's 15 years on King Street, and a discussion at how the stores departure will benefit other high-end retailers in Charleston -- and how a Forever 21 may not fit the lower King Street vibe.

Take a read over here.

Perhaps this could be Forever 21's slogan in Charleston: Finally the youth have a reason to walk down to Market Street.