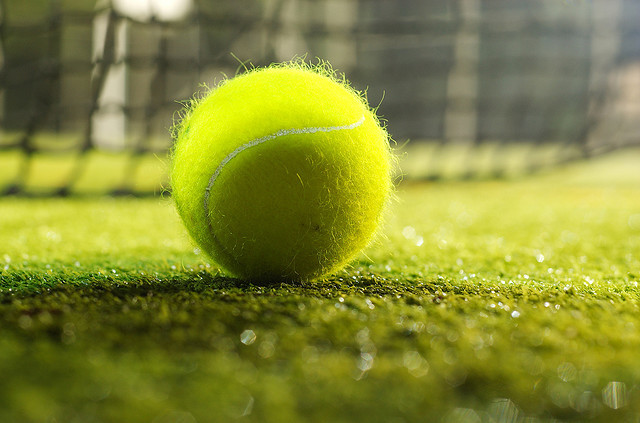 5:09 am on Friday April 8, 2011 | Posted by Ken Hawkins
Family Circle Cup heads into quarter finals, eyes on Wozniacki and Jankovic

No. 2 tournament seed Samantha Stosur ﻿fell to challenger Elena Vesnina 6-4, 6-1, on Thursday at the Family Circle Cup, but No.1 seed Caroline Wozniacki ﻿survived as the quarterfinals tip off today.

And now eyes are on the possibility of Wozniacki and No. 3 seed Jelena Jankovic ﻿surviving into the championship match on Sunday.

You can keep up with scores at the FCC's Twitter account and watch many games online, or you could get old fashioned and go in person.

But here's a rundown on what happened Thursday (with Friday's preview below):

Wozniacki was the first to take Stadium court, and she had to battle for over two and a half hours to beat No.15 seed Barbora Zahlavova Strycova, 76(6) 76(9).

Wozniacki let an early 4-1 lead slip and saved a set point before taking the first set in a tie-break; she fought back from 0-2 in the second set and missed five match points in the breaker, eventually saving a set point against her before closing Zahlavova Strycova out with an overhead on her sixth match point.

"I had a good start to the first set. I had chances in every game to finish off the set easily, but I missed a few shots and she was suddenly back in the game," Wozniacki said. "She's a fighter. She is a tricky opponent because you never know what to expect. She serves and volleys, then she plays high, then she just goes for it. It was difficult today. I'm happy to have pulled it through."

Zahlavova Strycova got her best career win over a No.14-ranked Petra Kvitova this year; she was looking for her first Top 10 win. "These matches are difficult because she's No.1," the Czech said. "I had set point in the first and the second set, and if you don't win these points, it's tough to win these matches.

"I played pretty good and I didn't make it, so it hurts a lot."

Next up for Wozniacki will be No.6 seed Yanina Wickmayer, who beat qualifier Anna Tatishvili, 64 75. Wozniacki is 1-0 lifetime against Wickmayer.

Stosur, the defending champion, wasn't so fortunate, falling to Elena Vesnina later on, 64 61. Stosur, who stormed to her biggest WTA title at this tournament a year ago, led 4-2 before losing 10 of the last 11 games of the match.

"A lot of things went wrong for me, unfortunately," Stosur said. "Elena played quite well. She served well and hit the ball well, and I wasn't able to really do anything to negate her hitting the ball low and flat and kind of rushing me during the points. I started well, then lost serve and the wheels kind of fell off."

The crowd tried to help rally Stosur in the second set, but to no avail. "I felt their support in the match. I would love to have played better and gotten myself back into it and be here another day, but unfortunately I'll have to wait for next year."

Vesnina was thrilled with the victory, her second in three meetings with the Australian. "This means a lot to me," the Russian said. "It has been a long time since I beat a Top 10 player. It was last year in Cincinnati I think, so that's why it was very important to me to stay focused the whole match and close it out."

Other daytime winners were No.11 seed Peng Shuai, who missed out on four match points at 5-4 in the second set but rebounded in the third for a 63 57 62 win over No.7 seed Nadia Petrova; No.12 seed Julia Goerges, who upset No.5 seed Shahar Peer, 62 63; Christina McHale, who was down 4-1 in the first set but rallied to beat No.10 seed Daniela Hantuchova, 76(3) 61; and qualifier Sania Mirza, who beat German wildcard Sabine Lisicki, 64 64.

At night, No.3 seed Jelena Jankovic beat Chanelle Scheepers, 62 62. "I played a pretty good match. There were some tough points, some interesting points where I was sliding and hitting a lot of balls," Jankovic said. "I'm trying to adjust my movement to the clay, and I think I'm doing pretty well. I still need some work, but I'm getting better. I look forward to my next match."

And here's what's slated for today:

Wozniacki, seeded No.1 and seeking her first Family Circle Cup title, is first on Stadium court at 1pm, facing No.6 seed Yanina Wickmayer. Neither player has dropped a set yet this week and Wickmayer has actually lost fewer games than Wozniacki, 13 to 14. The two have surprisingly only met once before, and it was on a very big stage, the 2009 US Open semifinals. Wozniacki won, 63 63.

Second up is No.11 seed Peng Shuai against qualifier Sania Mirza. After an excellent start to 2011, Peng is now spending her first career week in the world's Top 30, just the third Chinese player ever to do so (after Li Na and Zheng Jie). Mirza is a former Top 30 player, currently working her way back up the rankings after an injury-marred 2010. This will be a first-time meeting.

Next up is No.3 seed Jelena Jankovic against American rising star Christina McHale. Jankovic was the 2007 champion here, in fact the only former champion remaining in the draw. McHale has pulled off a pair of upsets to reach this round, beating No.8 seed Alisa Kleybanova and No.10 seed Daniela Hantuchova in the second and third rounds. Can she pull off her third straight upset and stop a Wozniacki-Jankovic semifinal? This is also a first-time meeting.

At night, No.12 seed Julia Goerges takes on Elena Vesnina. Both of them scored big upsets in the third round on Thursday, Goerges taking out No.5 seed Shahar Peer and Vesnina ousting No.2 seed and defending champion Sam Stosur. The two have played twice before, with Vesnina winning routinely both times - including once on green clay (Ponte Vedra Beach last year). But this is the first time Goerges is ranked higher when they play (No.35 to No.56).

You can snag the day's schedule here.