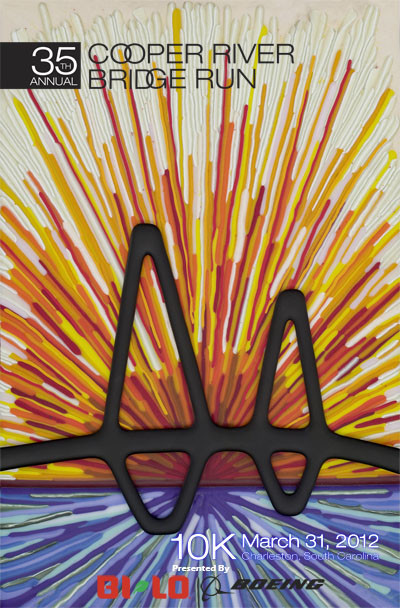 Update March 26: The 2012 Cooper River Bridge run is less than a week away and regular registration has officially sold out.

If you're getting ready to run, you should take a peek at the Bridge Run site's handy "Things You Should Know" section. On it you'll find shuttle info, a map of the race route, details on the finish festival, parking suggestions, and much, much more.

Update February 24: As of Thursday, more than 36,000 participants had signed up for the Cooper River Bridge Run. With a cap for registrations at 43,000 the race has fewer than 7,000 spots left and is expected to reached capacity by first week of March.

Update February 8: As of this morning at 10 a.m., 31,000 people are registered to participate in the 2012 Cooper River Bridge Run. According to a Tweet from the official Bridge Run account, this means that numbers are up 140% from this time last year.

Update January 31: The 2012 Cooper River Bridge Run is already 1/4 of the way full and the numbers are growing quickly. As as heads up to anyone interested in signing up for the race, but has yet to do so - early registration price ($30) ends February 1st. After the 1st, the price goes up to $40.

First reporting: A Daniel Island ﻿artists with a passion for glass has won the 2012 Cooper River Bridge Run poster contest.

Greg Rawls' ﻿win was for the 35th year of the run that takes place on March 31.

You can read a bit about Rawls below, from the bridge run website:

Greg Rawls has been creating kiln-formed (fused) glass for the past twelve years. He has studied extensively with many accomplished glass artists and has developed techniques for taking kiln-formed glass in new directions. He earned a BS in Biology and a MS in Public Health from the University of South Carolina and has lived in Charleston for over 20 years. He is currently pursuing glass art full time with his company, Gregorie Glass (www.gregorieglass.com) which specializes in kiln-formed glass for art and architecture.  Shirts and posters available now online and in-store.﻿

The Post and Courier﻿ has a bit more on Rawls over here.