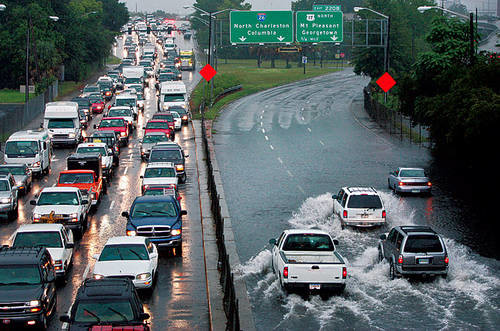 Image by City of Charleston The city wants to end flooding like this on the Crosstown, only problem is the pumps needed aren't cheap nor small.

As work continues on the first phase of flooding control for the Crosstown Expressway, a plan is emerging for how the rest of the $150 million project could take shape.

The project to alleviate flooding for some 500 acres of downtown would be split up into five overall phases that could take nine years.

The Post and Courier﻿ has a short report that outlines the details (read that here) and a nice infographic that shows the zones (see that here). If you want a more detailed look at the city's plans and pipe arrangement, check out this PDF.

You can always keep up with the latest (and get background) on the Septima Clark Project website and our topic page.

Update September 11: The plan unveiled by Charleston Mayor Joe Riley﻿ to solve one of the city's worst flooding issues is taking heat.

Critics say its plans for funding are dubious and the timing of it makes the plan little more than an election ploy — the mayor faces re-election on November 8.

The Post and Courier﻿ has a round out on the criticism; take a read here.

Update November 18: After the State Infrastructure Bank toured the Crosstown on Tuesday, hopes are high that the group could deliver﻿ the needed dollars to complete the crosstown work.

ABC News 4 has a video report on that; watch it here.

However, The Post and Courier﻿ reminds that the "bank's" wallet is hardly bottomless.