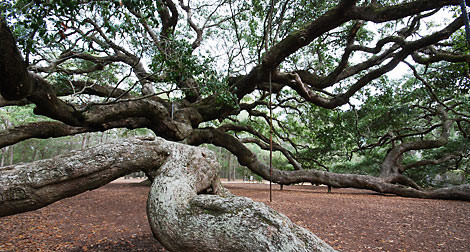 Image by Flickr user Keep My Day JobImage by 20080930angeloak.jpg

Update October 2: The developers will be allowed to chop down the trees. Read more.

Original story: Many environmentalists and Johns Islanders are irate over a plan to remove dozens of "grand tress" to build 600 homes in close proximity to the treasured Angel Oak, thought to be one of the oldest living things east of the Mississippi.

Charleston Board of Zoning Appeals will hold a meeting on Wednesday, October 1, to decide wether or not the Angel Oak Village can ax some of the Lowcountry's prized possessions.

There isn't much concern that the Angel Oak itself would be damaged, but that the development in its current form will degrade the rural nature of Johns Island that makes the Angel Oak so great. Taking the example to the extreme: No one would want to go visit the Angel Oak if it were in a Wal-Mart parking lot.

And there's also some concern about the long-term impact on the Angel Oak from the development. The Charleston City Paper also checked out the issue and did a good job rounding up many of the inside players. They say, in part:
[Samantha Siegel] worries the development's potential to either starve or oversaturate the tree can't be determined. Opponents also claim the development could imperil local bird habitats and other wildlife, and that the Angel Oak experience will be changed foreve

The latest development is in addition to many others already popping up in the area.

If you're concerned check SaveTheAngelOak.org to learn about the plan and then head over to 75 Calhoun Street on Wednesday, October 1, at 5 p.m. to let the Board of Zoning Appeals know if you think it's too much development.

Also worth noting: The City of Charleston has recently approved a network of roads for John's Island in stead of baking a plan to widen Maybank Highway.

But as much of Johns Island is in Charleston County, county officials will need to back the plan, too. But it appears they will.

So, if you have the the thought of chopping down unnecessary trees, Charleston is generally sympathetic.

Whenever I hear of these "rural vs. development" arguments, I'm reminded of the opening to Midnight in the Garden of Good and Evil:
There being no direct route to Savannah from Charleston, I followed a zigzagging course that took me through the tidal flatlands of the South Carolina low country. As I approached Savannah, the road narrowed to a two-lane blacktop shaded by tall trees. There was an occasional produce stand by the side of the road and a few cottages set into the foliage, but nothing resembling urban sprawl. The voice on the car radio informed me that I had entered a zone called the Coastal Empire. "The weather outlook for the Coastal Empire," it said, "is for highs in the mid-eighties, with moderate seas and a light chop on inland waters."

The rural nature is 80% of why many live on Johns Island, take too much of it away and the people will leave, too.