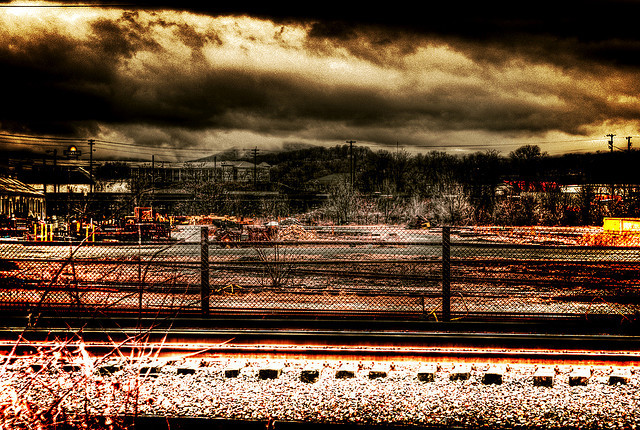 Image by Flickr user M-A-V Not a happy scene near these tracks.

Original posting, updates are at the bottom:

When a city's mayor (and other regional mayors) have publicly backed one plan and the state decided to go ahead and do it the other way without any public input, one wouldn't expect folks to be happy.

Still, a recent written exchange between North Charleston Mayor Keith Summey and former state Commerce Secretary Bob Faith (who brokered the land deal) is interesting as it shows Faith playing the role of an altruistic economic enabler and Summey as a man irate over backroom dealing.

Take a read of what's up over at The Post and Courier.

There's still no word on any public meetings over the rail deal. And I'll also re-point out this Charleston City Paper post from earlier this week that shows just how irate much of the Park Circle community is over things.

One thing that's on my radar, and something I hope to put together today, is a map that makes it clear to those outside Park Circle regulars on how the state's plan will encircle the community with rail.

The meeting will be attended by Mayor Keith Summey and Councilman Kurt Taylor who will speak on the rail topic.

The meeting is open to the public and is scheduled for 6:30 p.m.

Update January 12, video and Facebook: There was a large turnout for yesterday's meeting where the mayor of North Charleston and many supporters are promising not only to fight, but take the issue to court.

ABC News 4 was there and has a nice video; watch it here. As does Live 5 News.

And the Charleston City Paper has a report that talks about all the business fears the plan is stirring amongst local merchants; read that here.

Also a Facebook page, "Save Park Circle, No More Rails," has popped up as an organizing spot; see that here.