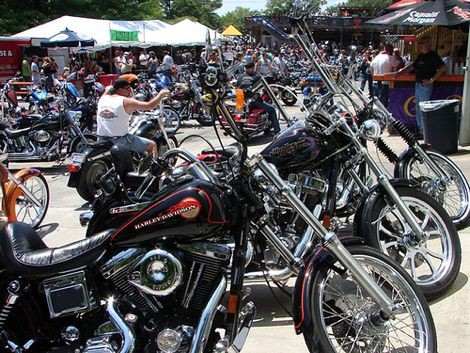 If you’re eager to don your leather jacket, waiting for this year’s Bike Week in Myrtle Beach, take a minute to read the news published Tuesday in the Myrtle Beach Sun News. The message is pretty clear: Not so fast, Harley.

Every May, Harley Davidson and Atlantic Beach Bikefest draw nearly half a million motorcycle enthusiasts to Myrtle Beach’s Grand Strand. The rally is one of the most popular in the U.S., and routinely stirs up controversy, tall tales, and booze soaked bliss.

According Myrtle Beach’s City Council, the rally is more trouble than it’s worth. Apparently it’s booze soaked bliss that packs a lasting hangover.

The City Council has had enough. This year they have announced new ordinances that restrict noise levels, enforce helmet laws, and limit public parties. Myrtle Beach will no longer host motorcycle rallies. Interested parties can read all about it at Myrtle Beach Biker Info.

But here’s the interesting thing: The City Council is not advertising this news. If people ask, the Council will explain the changes. If people don’t ask, well…

People who haven't followed the bike-rally news since fall might not know the city has implemented stricter noise and muffler rules, a local helmet law, rules about parties in parking lots, a juvenile curfew and more.

Chamber President and CEO Brad Dean said the site and brochures are not an ad campaign and will not be advertised or mailed out generally, but will be given to people who request information.

Dean said it's the chamber's job to provide information to visitors, and the group gets thousands of calls every year about the month of May - either from people who are interested in coming because of the rallies or in avoiding the area because of them.

That sounds fair. But I foresee more than one heated exchange between police officers and libertarian bikers. After all, the city has never officially hosted the rally. People are still going to show up, ready to go.

Some things change, some things stay the same. This year, in spite of, or because of its new restrictions, the Myrtle Beach Bike rally will surely stir controversy and tall tales.

As for that booze soaked bliss? We’ll have to wait and see.

Another snippet from the article:

People from out of the area like to stay in Myrtle Beach during the rallies, and the teenagers who follow the Bikefest riders turn Ocean Boulevard into a street party over Memorial Day weekend. Locals complain loudly each year about the rally attendees' noise, driving, activities and trash. But in 2008, after a Coastal Carolina University student was shot to death in a dispute over a parking space during Bikefest, even though the shooting didn't involve bikers, the city said it would take steps to end the rallies.