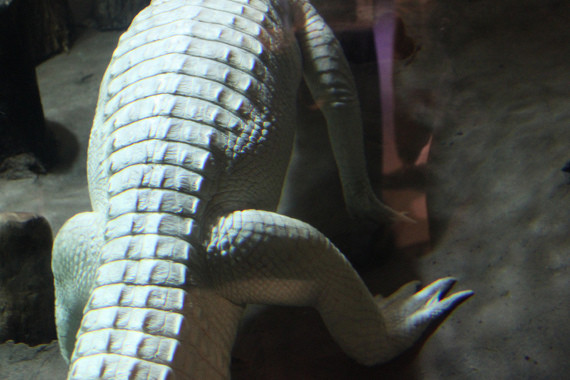 4:45 am on Friday March 19, 2010 | Posted by Amanda Click
South Carolina Aquarium to unveil their albino alligator (updated with photos)

Update March 19: The Post and Courier has posted their own story. Though well done, there's not too much new in it. What is of interest is this photo of the white gator with his jaws open.

This afternoon the South Carolina Aquarium unveiled their newest addition to the family, a 7 foot long male albino alligator.

A bit camera shy at first, the alligator kept his back to the crowd as more and more onlookers filtered into the new enclosure. The media as well as some lucky visitors were treated to a a feeding demonstration and heard a bit about the history of the reptile. Born in the wild and raised in captivity, the alligator has lived in a few other habitats before coming to his new home here in the Lowcountry. The alligator's albinism leaves him stark white, completely incapable of camouflaging and vulnerable to the sun. As we all learned, the alligators are fed rats, mice, chicks and alligator "pellets" (which look exactly the way they sound). The trained staff members place the food down on dry land, but then, as in the wild, the alligator will pull his prey down into the water to finish off the meal. Here you can see the alligator's long, pale body and strong jaws clamped down on a white rat, one of two that the trainers fed him during the feeding demonstration. The South Carolina Aquarium will officially open the alligator exhibit to the public on Saturday, March 20th. Don't miss it.

For more photographs of the South Carolina Aquarium's albino alligator, check out our Flickr stream.

A rare ghost of the swamp will be revealed at the South Carolina Aquarium on March 20th with the addition of an albino alligator.

The light-sensitive creature will live in the Blackwater Swamp exhibit among the snakes and fish of the
renovated Piedmont area. One of fewer than 50 living albino alligators in the country, visitors will have the chance to learn ‘the great success story’ of the American alligator and learn more about what makes its scales translucent.

For those of you who are South Carolina Aquarium members, there will be a special preview event on March 19th. Space is limited, so that means that reservations are required. To make a reservation for the exciting event call (843) 577-3474.

Learn more about the new addition to the aquarium by clicking here.