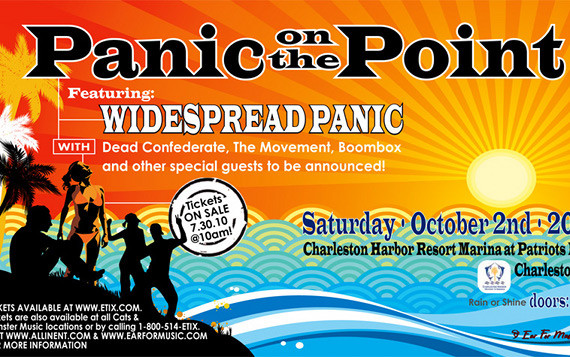 Image by Ear For Music

Update October 4: The Charleston City Paper has come out with their own post-concert review courtesy of Stratton Lawrence; read it here.

Update October 3: The show has come and gone and if you want a quick rundown of the night's festivities, Charleston Scene has the hookup.

Update September 28: If you're wondering why the show has been jumping around so dang much, you're not alone. The Charleston City Paper hit up Widespread Panic for some details and got them; take a read here.

Update September 27: The North Charleston Coliseum has issued a parking advisory for this Saturday's Widespread Panic concert and are encouraging people to carpool or take advantage of the free parking and shuttles that will be available at the North Charleston Fire Museum and Tanger Outlet Mall parking lots from 4 p.m. on.

Here is the tentative schedule for the events for the day:

Apparently, things didn't quite work out with the Exchange Park Fairgrounds venue, so the Widespread Panic concert has been moved again, this time to the North Charleston Coliseum.

The Charleston City Paper has the update.

Update September 1: The venue is being changed to the Exchange Park Fairgrounds located at 9850 Highway 78 in Ladson. Tickets are still $37.50 and pre-sold tickets for the old venue will be honored.

They're saying the venue change was done to allow more fans in for the show.

The press release on the changes can be read here.

Panic on the Point will be taking place in a large field adjacent to the Charleston Harbor Resort and will feature an all-day lineup of live music.

In addition to Widespread Panic, Dead Confederate, The Movement, and Boombox will all take the stage to contribute to your mind melt. Tickets to the show go on sale at 10 a.m. this Friday, July 30th and will be $37.50 each.

The Charleston City Paper has a preview of the upcoming mini-festival of sorts along with links to ticket sales.