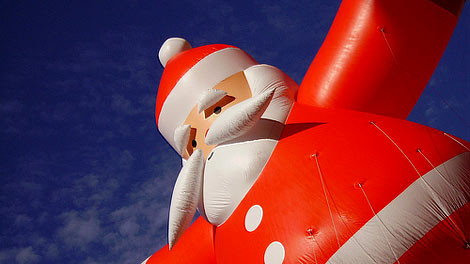 North Charleston's Christmas Festival is Saturday, December 6, from 4 to 9 p.m. In an e-mail the city said:
Families, friends, and neighbors are invited to share the joys of the season through delightful entertainment, children’s activities, festive food and decorations, a Holiday market, and an evening parade. Park Circle, the Felix Davis Community Center, the surrounding traffic circle, and major thoroughfares transform into a magical holiday scene with lighted snowflakes, Christmas trees, and other signs of the season.

Read more stories on this subject in our Christmas topic page.The annual Christmas parade begins at 6:00pm, followed by the Mayor’s tree lighting ceremony at 7:00pm. Children’s activities begin at 4:00pm and include jump castles, hayrides, and a petting zoo. Entertainment will take place on the front lawn and the auditorium or amphitheater stages at the Felix Davis Community Center at Park Circle from 5:00pm to 6:00pm and from 7:00pm to 9:00pm. Expect performances by the Charleston Brass Ensemble, The Ashley Gospel Singers, Happy Feet Dance Company, The Community Dance Theater, Tony & Company, as well as a number of community and school music and dance groups. The Festival also features a marshmallow roasting pit, visits with Santa, a Holiday Art, Craft, and Farmer’s Market, and the Walgreens Take Care Health Tour Bus.

Charleston's Reindeer Run is Saturday, December 6, at 9 a.m. in downtown Charleston. Race starts at East Bay and Queen streets. Register day of race for about $30.

The Parade of Boats is Saturday, December 6, from 5 to 8 p.m. Get details.

Charleston's 28th annual Christmas parade is Sunday, December 7, from 2 to 5 p.m. in downtown Charleston. The city says:
This holiday tradition is better than ever as bands, floats, marchers and performers parade through downtown Charleston. The parade begins at the intersection of Calhoun and Meeting Streets, proceeds down King Street to Broad Street to Lockwood Blvd. Sponsored by the Tri-County Fire Chiefs Association. For more information, please call (843) 720-1981.

Su McManus-Frost, event planner for the Town of Mount Pleasant:
We are delighted to welcome old favorites such as the Wando High School Band and Burke High School Band to the parade. New this year, will be the added pageantry of the Charleston Police Pipes and Drums. Steeped in history, the police officers and volunteers will wear their unique blue tartans, dress kilts and sporrans with great pomp and circumstance. We are looking forward to these three bands’ musical feats.