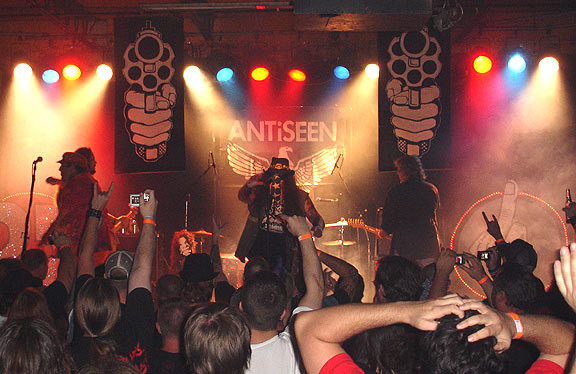 Image by Photo by Michael Pilmer, http://www.antiseen.comImage by stage2.jpg The band takes the stage at their 25th anniversay show last year.

Update August 29: The Charleston City Paper went and reports back with a video; go take a look.

After a killer opening set for the Dwarves earlier in the year, ANTiSEEN are returning to the Oasis Bar and Grill this Thursday, August 27th for a headlining show.

These guys have been playing unapologetic, in your face, brutal Southern punk-rock since 1983 and show no signs of letting up any time soon. After dozens of albums, EPs and world tours, singer Jeff Clayon and guitarist Joe Young have recruited a new rhythm section (Jon Bowman on bass and Phil Keller on drums) and have been hitting it hard this year.

Expect to see some bloodshed, literally. Clayton's forehead isn't a gruesome mass of scar tissue for no reason. This show is not to be missed by punk fans, rock fans, or wrestling fans alike. Belligerent and Hybrid Mutants are opening.

Oasis Bar and Grill is located at 778 Folly Road in James Island.