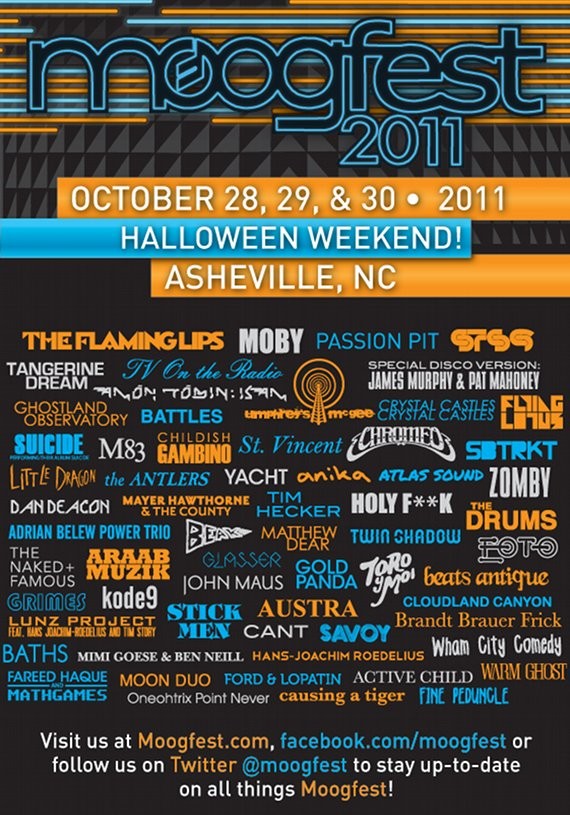 8:00 am on Tuesday October 11, 2011 | Posted by Amanda Click
Make the Halloween weekend musical pilgrimage to Moogfest 2011

The Charleston area has its fair share of music festivals in October, with Skinful Halloween and the Southern Ground Music and Food Festival both hitting up the Holy City the upcoming weeks. However, if you're looking for the ultimate music festival that's within driving distance, look no further than Moogfest.

Held annually in downtown Asheville, North Carolina, Moogfest is a three day celebration of the life and musical contributions of Bob Moog. Moog (May 23, 1934 – August 21, 2005)﻿ was an American pioneer of electronic music, best known as the inventor of the Moog synthesizer.

Moogfest 2011's lineup is an electronic music fan's wet dream. Seriously. For a little taste of what you can expect to see, I'll go ahead and throw a few names your way: Moby, Chromeo, Crystal Castles, Amon Tobin, St. Vincent, The Flaming Lips, TV On the Radio, STS9, Ghostland Observatory Holy F**k and SBTRKT. To boot, the festival is going down on October 28, 29 and 30. That's right folks  -- a major Halloween weekend dance party in one of the coolest cities in the south.

In addition to three days of music, Moogfest is hosting the exhibition of Brian Eno’s (yes, that Brian Eno) 77 Million Paintings as a part of this year’s continually expanding palette of festival offerings. This "visual music" exhibition will mark the first installation of 77 Million Paintings in the United States, outside of San Francisco and Los Angeles.

Weekend passes, single day passes and VIP passes to Moogfest are on sale now and range from $75 to $379.

You can keep up with festival news by following @Moogfest on Twitter or by liking the Moogfest page on Facebook.