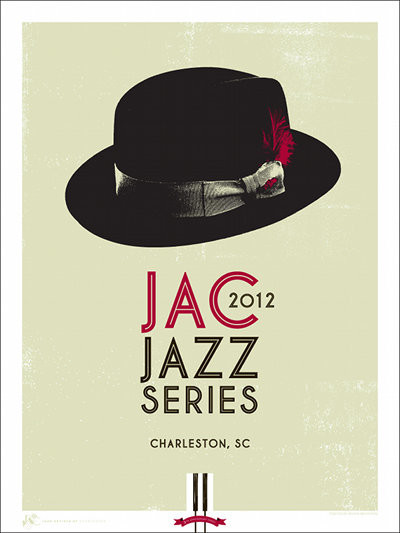 Image by Photo by Alice Keeney/Design by Bivins Brothers

Update June 5: The jazz continues tonight with Gennaro's Jazz Ensemble's "Back to the Hard Bop Future."

Gennaro's Jazz Ensemble has been a staple in the local music scene for the past twenty years. Their sound, reminiscent of the great small ensembles from the hard bop years of jazz, is influenced by musicians including Horace Silver, J.J. Johnson, Dexter Gordon and Kenny Dorham. We are thrilled to welcome Gennaro's back to the JAC Jazz Series for the second year in a row.

Watch a sneak preview below:

Lowcountry native Cameron Harder Handel is an inaugural member of the Charleston Jazz Orchestra, featured soloist in the North American touring cast of the Tony Award-winning Broadway production, "Blast!" and has spent the last several years touring alongside pop icon, Micheal Bolton. Handel and her group of locally based musicians will pay tribute to Blue Mitchell, the great trumpeter known for his contributions to jazz, R&B, rock, and funk.

On Thursday, June 7th, the Charleston Latin Jazz Collective takes to the stage for "Latin Meets Jazz in the Lowcountry."

No strangers to the JAC Jazz Series stage, the Charleston Latin Jazz Collective - formerly known as Tumbao - will come together for another energetic show featuring an exquisite evening of Latin rhythms and music. Grab a partner and some dancing shoes; it's time to salsa!

For this very special closing night of the 5th Annual JAC Jazz Series, Maestro Charlton Singleton and members of the Charleston Jazz Orchestra will perform an intimate set of their swingin' favorites from the CJO repetoire. Don't miss out on this annual tradition and a rare opportunity to experience Charleston's big band sound in a cozy jazz club setting!

For show times and ticketing info for all of the shows listed above, visit the official Jazz Artists of Charleston page.

Update May 24: The 5th Annual JAC Jazz Series is underway!

The JAC has produced some fun teaser videos of a few upcoming shows which you can watch here.

Update May 19: Due to unforeseen construction delays, The Mezz will unfortunately not be available for the 5th Annual JAC Jazz Series.

Update May 8: This just in from the Jazz House:

This year’s JAC Jazz Series commemorative poster is a tribute to our dear friend and colleague Jack Arthur McCray. The hat image is from a photograph of one of Jack’s many signature hats, taken by Alice Keeney, with permission and assistance from Jack’s son Terry and daughter Krystel.

The layout and design is by Evan Bivins of Bivins Brothers with collaborative production from Jazz Artists of Charleston. The official commemorative poster is a limited edition 18×24 screen print and is currently available for pre-sale. Posters will be available for sale starting May 21 at the Charleston Jazz House, 185 St. Philip Street.

First reporting: The Jazz Artists of Charleston have announced the exciting lineup for the 2012 JAC Jazz Series which run from May 20th – June 8th and be held at The Mezz, a new jazz bar located 276 King Street right above Sermet's Corner.

Each set is approximately 75 minutes long and doors open 30 minutes prior to each set. Food and beverages will be available for purchase during the show. Heads up - seating for all shows is first come, first serve, and there is no elevator to get you up to the second floor.

For a peek at the schedule of performances which includes everything from "Pop Song Provocations" to a show dedicated to timeless classics by Ella Fitzgerald and Louis Armstrong,  visit the official Jazz Artists of Charleston website.

Tickets are $20 in advance, $25 day-of, except for special events, and can be purchased online, by phone or at the Charleston Jazz House, located at 185 St. Philip Street.