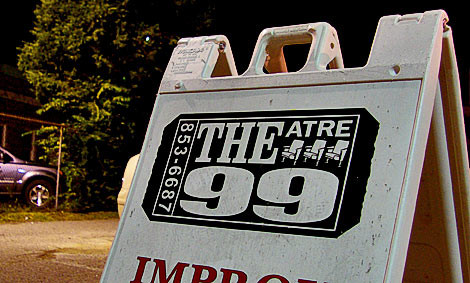 Theatre 99 now has comedy three nights a week, and their Wednesday show is just five bucks.

The Have Nots make comedy on Wednesdays, Fridays, and Saturdays.

And they also have some other special shows, including a two-for-one deal. They say:
Special 10 PM shows:
THIS IS CHUCKTOWN! featuring "White Men Can't Hump"
A new collection of off the wall sketches written and performed by local comics that are part of the Improv Family.
Saturday, October 4 & Saturday October 25
10PM $8 tickets (Come to the 8:00 PM show and get tickets for 5 bucks!)

The Banana Monologues
The hilarious true story about one relationship, one woman... that gave one man, the best sex of his life... and all the crap that went all long with it. Starring John Brennan.
Saturday, November 1
10PM $10 tickets (Special 2 for 1 deal. Email your reservations to thehavenots2000@aol.com and get 2 tickets for the price of 1. This offer valid until October 25th...so get your tickets now.)

Get your tickets online or at the door for some laughter three nights a week. Theatre 99 is located at 280 Meeting Street, Downtown.