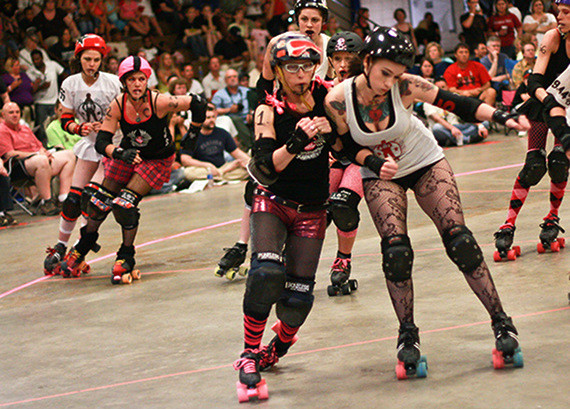 7:03 am on Wednesday August 4, 2010 | Posted by Amanda Click
HighRollers host upstate squad for Dog Days of Destruction (updated with video)

The HighRollers posted another win over the weekend, holding it down against the U.R.G.E. on their home turf.

Local photog Jonathan Stout aka BadJon was on hand and got some great video footage of the bout. Watch it below.

First reporting: The Lowcountry HighRollers are preparing to host the Upstate Roller Girl Evolution for Dog Days of Destruction on Saturday, July 31st at The Citadel's McAlister Field House.

In addition to a hopefully brutal battle, fans can enjoy beer, music from Atlanta-based roller derby band Tricksy, a demonstration from Charleston Krav Maga, plus a raffle with a chance to win some sweet stuff. Keep the party going post-bout and follow the derby girls their official after party at the Music Farm.

Tickets are $10 in advance and $12 at the door with a portion of the proceeds benefitting People Against Rape. Doors open at 5 p.m. and the bout begins at 6 p.m.