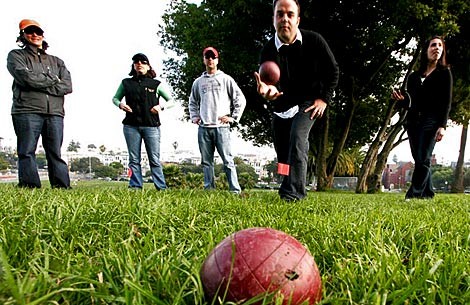 April 26, 2008 -- Tournament -- 9:30 AM
Hosted by the Charleston Battery and held at Blackbaud Soccer Stadium.
The day begins with biscuits from Chick-fil-A and Mimosas.
The beer truck opens at 10:30 AM.
Lunch is provided by Five Guys Famous Burger and Fries.
The tournament is held on 25 courts with four teams per court. The morning competition is round robin play with the highest scoring team returning after lunch for single elimination play.

If you want to create a team it's a $500 donation, but here are all the details.

In addition, a practice session for new or rusty bocce players will be held on March 28th from 11:30 a.m. to 1 p.m. at Ted’s Butcherblock downtown. Event participates as well as the general public can join in for a round of bocce and a refresher on the rules of the game. A special promotional lunch will also be available.

Not sure what Bocce is? Check out the video from last year: