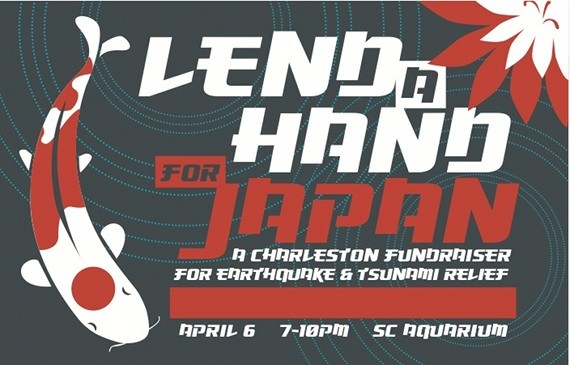 3:38 am on Friday March 25, 2011
Local organizations, restaurants band together to 'Lend a Hand for Japan'

The massive earthquake and resulting tsunami on March 11th in Northern Japan damaged 14 animal institutions. Because these institutions are not able to distribute basic necessities like food and water, the animals at the zoos and aquariums there have suffered greatly.

The Charleston City Paper is teaming up with the South Carolina Aquarium, Tristan Restaurant, Icebox Bar Service, Other Brother Entertainment, and numerous other local businesses to host an event on April 6th to aid Japan via the Japanese Association of Zoos & Aquariums (JAZA) along with the American Red Cross.

One hundred percent of the ticket sales and silent auction proceeds will benefit JAZA and the American Red Cross, which are already mobilized on the ground providing aid in Japan.

From 7 to 10 p.m., restaurants such as Tristan, Triangle Char and Bar, REV Foods (Taco Boy, Closed for Business, and Monza), Roti Rolls, and Duvall Catering will put their spin on Japanese cuisine, and local guest bartenders will serve up specialty cocktails just for the occasion. There will also be live musical entertainment, and guests will be free to explore all of the Aquarium's exhibits.

Tickets are a minimum donation of $40, and everything is included.