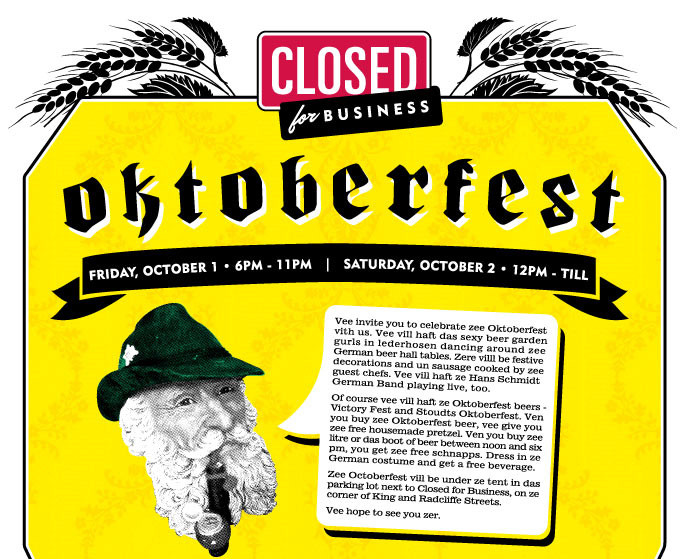 8:11 am on Thursday September 30, 2010 | Posted by Ken Hawkins
Getting the jump on Oktoberfest at Closed for Business (plus tasty sausage)

Generally you'll find most Oktoberfests falling in mid to later October, but Closed Business is getting the jump on the beer and sausage loving season by hosting it this weekend on Friday and Saturday, October 1-2.

The two-day event features is featuring a selection Oktoberfest beers, and sausages prepared by local guest chefs, live music, house-made pretzels, all under a tent with much festiveness.

Featured taps will be Victory Festbier (B+, 5.6%, sweet then dry and hoppy) and Stoudts Oktoberfest (B, 5%, sweet toasty dry)  being served up in liter form at $7 and $3.50 for 12oz pours, if you do opt for the liter you'll get a free house made pretzel. Come in full German Costume you get a free liter.

They'll be going on Friday, October 1, from 6 p.m. to at least 11 and Saturday from noon to until at least 11 in the parking lot next to Closed for Business at corner of King and Radcliffe streets.

Live music will be by Hans Schmidt German Band.

Also on the radar is the Oktoberfest event at the Charleston Battery stadium on October 24 Gene's Haufbrau on October 23-24.