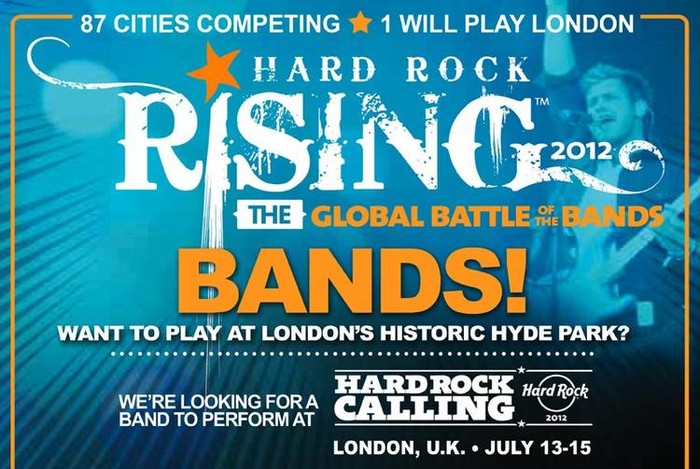 Update 2/9/12: The winners of the online voting round have been announced for the 4th Annual Hard Rock Rising contest.

The competition will take place on February 15, 22, and 29, 2012 at the Hard Rock Cafe starting at 8 p.m. The contest will feature three local and regional acts in 30 minute sets vying for the winning spot each night.

The winners from each night will then go on to battle it out on Saturday, March 3﻿, 2012 outside Hard Rock Cafe at the Celebrity Square stage.

So, which local and regional acts made the cut to compete at Hard Rock Cafe? You'll have to hop on over to ListenUpMB.com to find out.

Hard Rock Rising is a competition that pits regional bands against each other in hopes of winning the Global competition, competing against 85 other bands from around the world. Ultimately, one band will fly to London to play Hard Rock Calling in Hyde Park﻿. So far only one of the big name headliners has been announced for Hard Rock Calling and that would be The Boss himself, Bruce Springsteen﻿.

Over at the Myrtle Beach Hard Rock Cafe Facebook page music lovers can vote on their favorite undiscovered band. Each download counts as a vote (limit one vote per band) and you can download from as many bands as you'd like﻿. On your Facebook profile, you need to have your Current City or Hometown filled in with a location that is A) within 100 miles of the host city if you are in the US or B) in the same country as the host city if you are outside the US.﻿

Some of the regional talent listed include: Power Born Rebellion, Death of Paris, The Big Lie, Below the Baseline, Shamroc-N-DJ Qp, Stealing Anger,  Tree House and many more.

You can click here and vote for your favorite local bands by downloading their track. Voting has been extended until February 6th at 11:59 p.m. EST.