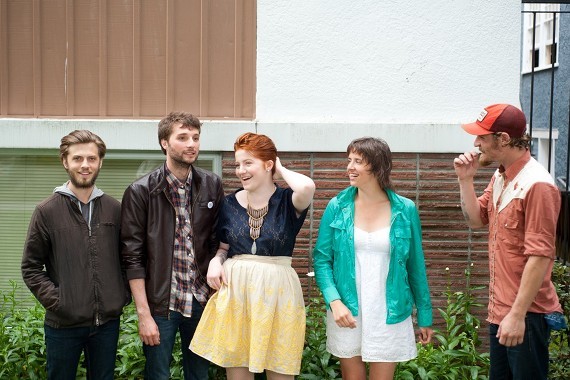 6:55 am on Thursday May 31, 2012 | Posted by Amanda Click
Joy Kills Sorrow brings their unparalleled brand of indie folk to the Cistern

Joy Kills Sorrow is a group of accomplished musicians that combine excellent song writing with very tight, high quality musicianship. To sum it up for you: this group of talented young'uns are the new faces of folk.

The band was formed up in Boston - not your typical breeding ground for a folk outfit - but don't let that deter you. The magic of Joy Kills Sorow's music comes from the fact that they encompass traditional string band sounds, but allow the indie rock sensibility of bassist/songwriter Bridget Kearney's lyrics and lush sound shine through.

Here's the best description of the band I've ever read, courtesy of PopMatter.com:

The style of bluegrass presented on This Unknown Science is a lot like what you’d get if the soundtrack to O Brother, Where Art Thou? was performed on crack cocaine. Yet there are moments of fragile beauty that you’ll want to place beside your pillow and cuddle up with. Clearly flavoured by and inspired by the folk music of rural Appalachia, This Unknown Science is spun in a cocoon of new folk influences. At times, you can hear a hint of Bon Iver, if Justin Vernon performed with a sense of spirit and vigour. Chamber music influences filter through the mix as well, with some well-placed and organic cello adding texture to many of these songs of affirmation and tribulation. Some songs are lush and supple – the quiet “When I Grow Up”, the haunting “Jason” – and some you want to quite simply kick off your clogs and dance to, like “New Man”, which has the band singing out a series of “whoo-hoo’s” during the chorus with such infection that it carries you along as the song gradually gains momentum like a steam train being shovelled hastily with coal.

Spoleto has come to the rescue this year and is bringing the band to play on the College of Charleston Cistern tonight at 9 p.m. Tickets are still available. Hop on the train.