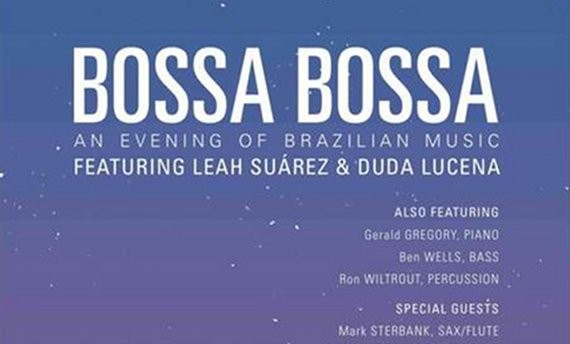 3:00 pm on Wednesday August 11, 2010 | Posted by
Bossa Bossa: an evening of Brazillian music with Leah Suarez and Duda Lucena

Bossa Bossa  is a one-night only concert taking place this Saturday, August 14th at 8 p.m. at the Footlight Players Theatre (20 Queen Street). Doors open at 7 p.m. and admission is $20 in advance, $25 day-of show.  Tickets available online, in person at Monster Music locations and via telephone at (843) 793-9637.

Bossa Bossa:  An evening with Leah Suárez and Duda Lucena, will feature a range of Brazilian music, covering selections from a mix of notable composers including Antonio Carolos Jobim, Baden Powell, Caetano Veloso, Djaván, and Milton Nascimento, reminiscent of the 1960s Brazilian style of music.  The arrangements will be the collaborative work of Suárez and Lucena – a special touch to otherwise standard repertoire.

Bossa Bossa is the first co-production for Leah Suárez and Duda Lucena.  Both musicians are notable fixtures in the Charleston jazz scene and have collaborated on two occasions only, including a featured duet last year with the Charleston Jazz Orchestra, performing Jobim’s “Aguas de Marco” for the big band’s Latin Night.﻿