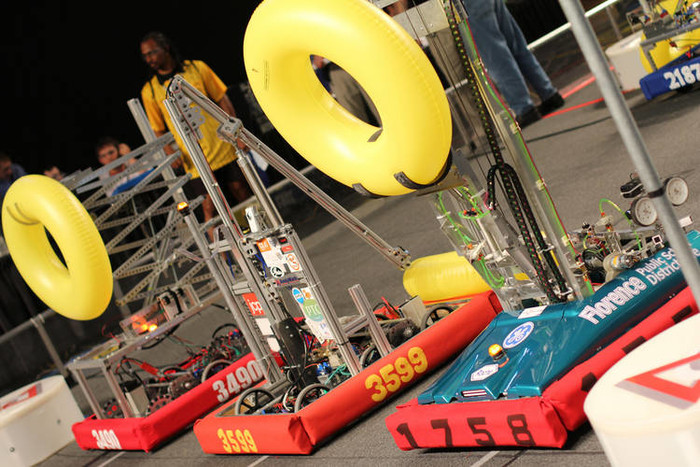 3:39 am on Saturday March 26, 2011 | Posted by Ken Hawkins
Robots spar: From across the Southeast, high school teams compete at FIRST Robotics Competition in North Charleston

Teams in the FIRST Robotics Competition Palmetto Regional will vie for regional awards and a spot at the FIRST Championship this March 24-26 at the North Charleston Coliseum.

From eight states spanning the Southeast, students from 43 schools have converged on North Charleston to strut their tech at the FIRST Robotics Competition Palmetto Regional this weekend.

Teams are competing at a free, open-to-the-public series of events at the North Charleston Coliseum where, in this year’s robotics game, “LOGO MOTION", two alliances of three teams will compete on a 27-by-54-foot field with poles.

They will attempt to earn points by hanging as many triangle, circle, and square logo pieces as possible.

Bonus points will be earned for each robot that can hang and assemble logo pieces to form the FIRST logo. Robots can also deploy Mini-Bots to climb vertical poles for a chance to earn additional points.

“It’s not about the robots,” said FIRST founder Dean Kamen. “It’s much bigger than that. It’s about building self-confidence, respect, and important relationships with people who invent new technologies and work to make the future better than the past.”

You can see more photos from day one and two over at North Charleston's Flickr page.