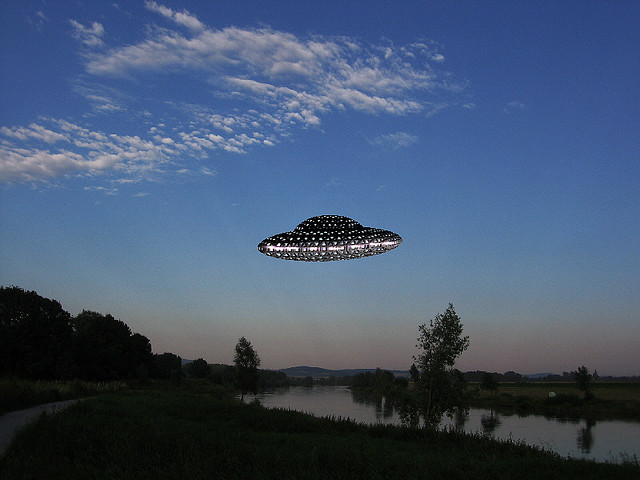 11:32 am on Tuesday January 15, 2013
"Encounters: UFO Experience" coming to Myrtle Beach this spring

via a press release:

The world's first exhibition exploring the history of UFOs will debut at Broadway at the Beach in Myrtle Beach, S.C. in Spring 2013. The exhibition, entitled "Encounters: UFO Experience," presented by Intergalactic Brands, will feature more than 200 original artifacts, conceptual models, and documented film clips and recordings that support claims of ancient encounters through modern day sightings.

The exhibition will feature seven galleries that will showcase ancient alien encounters, the military's role in modern sightings, and pop culture's fascination with extraterrestrial life. Interactive aspects of the exhibition will enable visitors to personally experience an alien abduction that is based on observations and reports from alien abductees.

Encounters will allow visitors to learn more about the evidence surrounding famous UFO events in places like Area 51 and Roswell, and to reach their own conclusions about the many conspiracy theories swirling around such events. In addition, the exhibition's abduction experience will provide site, sound and sensory involvement in an interactive experience based on thousands of eye witness accounts of alien abductions.

The space travel gallery provides an impressive tour of past and present propulsion systems and how they have contributed to modern day space programs. Science Fiction will also get its time in the spotlight as the Pop Culture gallery brings visitors face to face with replicas of props from Hollywood productions like ET, Close Encounters Of The Third Kind, and Men In Black.

"For the first time ever, people will experience the first comprehensive look at alien encounters all in one place," said Brian Bouquet of The Event Agency, the company responsible for developing the exhibition. "The unique and extraordinary content in our galleries have been provided by UFOlogists from around the world. Without the resources of these private collectors, this exhibition would not be possible. We plan to keep Encounters dynamic and fresh, so we'll always be looking for more contributions to the story it tells."

The Myrtle Beach, S.C. area was selected as the site to premier Encounters because of its convenient location along the East Coast and its popularity among vacationers - 14 million of which visit the seaside town each year. But the major reason for choosing Myrtle Beach for the world premier is the area's connection to alien encounters. Sightings over the Myrtle Beach region have been reported for nearly 50 years. One of the largest sightings of UFOs occurred in August 2012 when hundreds of people witnessed what appeared to be a large mother ship rendez-vousing with a smaller flying craft over North Myrtle Beach.

"The coastal area around Myrtle Beach has a well-documented history of multiple UFO sightings," said Bouquet. "In 2012 alone, 59 sightings were reported. Our company has staged successful exhibitions at Broadway at the Beach for the last two years. And, given Myrtle Beach's interest in UFOs, it seemed like the ideal place to launch what we expect will be an exhibition that will eventually travel around the world."

The family-friendly exhibition will be located on the northeastern side of Broadway at the Beach in a building distinguished by a flying saucer bursting from its side. Days of operation in April and May will be limited to Thursday through Sunday. Summer hours will be announced at a later date.

"We expect Encounters to be a very popular attraction at Broadway at the Beach," said Patrick Walsh, senior vice president of asset management with the Burroughs & Chapin Company, Inc., which owns Broadway at the Beach. "Whether you're a science fact or a science fiction fan or just curious about intergalactic travel and its implications for the people of earth, you'll find this exhibition to be immersive, entertaining and very, very memorable."