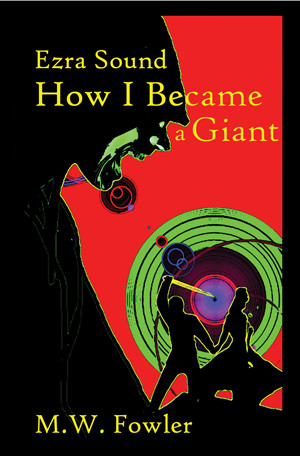 The idea of escaping the doldrums of modern office life for a grander destiny is something that resonates in the modern world.

For the title character in Ezra Sound: How I Became a Giant﻿, the debut novel by local author M. W. Fowler, this dream is about to explode in a cloud of magic dust.  Ezra Sound is a piece of post-Harry Potter fiction, a well-crafted love letter to British culture (beyond the obvious Potter-ish stylings) that will give casual readers a mystery that will keep them guessing and Anglophiles a plethora of fun Easter eggs on top of a compelling plot that seems both familiar and wholly unique.

The novel’s hero is, by all appearances, a simple office worker with a comfortable, but mundane, life until the day he witnesses an alleyway battle between two witches.  From here, Ezra’s life is turned upside-down (or rightside-up, depending on your point of view), as he enters a realm filled with magic, monsters, and the occasional demon to discover who he really his and what role he has to play in the fate of the world.  Accompanying Ezra on his quest are Lauren, a co-worker who Ezra is (perhaps not so strangely) attracted to, Billie, a tough-as-nails cab driver, and Bronx, a massive satyr bodyguard.  Opposing them is the mysterious dark wizard Malleus and his shadow, Suellam, whose motivations may not necessarily coincide with those of his master.

Ezra seems to be, physically, much less than the “giant” implied by the title, as he is “accustomed to the majority of the world’s population being taller than him.”  His stature and neurotic demeanor immediately paint the image of an underdog who is apparently out of his element despite what the people he encounters want him (and us) to think.  Ezra is a wonderfully realized protagonist who develops in a manner both well-paced and genuine, and watching him come into his own over the course of the story is fulfilling and enjoyable.  His friends are also well-realized and unique, particularly Billie and Bronx, whose interplay provides some of the book’s most effective and sincere moments of levity.

That Ezra himself is so fleshed-out in this volume does have a downside, as the piece’s villain ultimately lacks similar definition.  While Malleus’ few appearances certainly suggest that he is powerful, the villain’s true motivations are left somewhat ambiguous.  Malleus (or Suellam) never rises above being a two-dimensional threat, someone we know is dangerous only because the characters in the story keep telling us that he is.  One would presume, however, that future installments will expound on this (this is “Book I,” after all).

The book’s momentum lasts throughout, almost never dragging its feet as it breezes through Ezra’s rediscovery of the magical world.  The twists and turns of the narrative are unpredictable but never forced or unnatural, providing a smooth, surprising, almost cinematic reading experience.  The novel ends quickly, devoting a single chapter to the climactic battle between good and evil.  But then, the main conflict at the heart of Ezra Sound is not the struggle between the titular hero and his nemesis, but rather the internal struggle Ezra contends with as he ventures down a magical road of self-discovery.

The book constantly reminds readers of its British setting, whether through the frequent mentions of locations, slang, or pop culture allusions.  Occasionally, Fowler tries to make the book too British for its own good, regressing at times to an area bordering parody, although this is presented with a knowing wink on a few occasions (a character suggesting that fish-and-chips seems “a bit stereotypical” as a meal option, for instance).  Although the story rockets from one location to another, following Ezra on his quest, the scenery never fails to conjure distinctly British images and feelings: dark, foggy, and cold.  While this suits the narrative just fine, we are left with the impression that Ezra’s world is much bigger than what we’re presented with here.  Although this may leave some readers feeling as though there is untapped potential in this novel, it truly only suggests that stories even greater and more epic in scope await Ezra, and us, in the future.

On first reading, the novel seems to be a series of treasure hunts connected to Ezra’s identity quest that are largely unrelated to the greater looming threat of Malleus.  It is a testament to Fowler’s burgeoning ability as a writer that he is able to tie all of these disparate threads together and, in the novel’s denouement, provide a conclusion that brings the entire experience into focus as a tightly-knit adventure.  Ezra Sound: How I Became a Giant﻿﻿ is a novel that any fan of modern fantasy should enjoy, brimming with whimsy, promise, and plenty of magic.﻿

Chek out more Ezra Sound: How I Became a Giant news