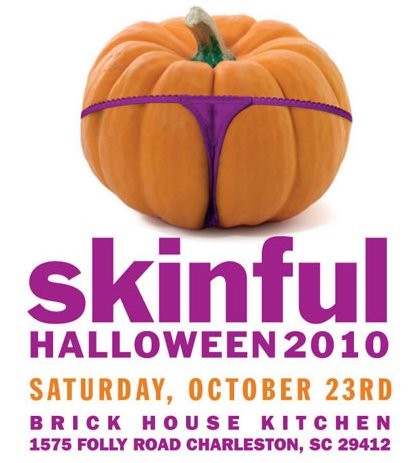 Skinful Halloween 2010 was huge. If you weren't there, you missed out -- sorry, but it's true.

There were some crazy moment's that night: A rave cage dance floor with incredible light shows, a zip line high above all the action, an avatar Capoeira session, the one-man dance party performance by Cousin Dan, and the utter state of debauchery that made the night 100 percent unforgettable.

The Charleston City Paper also has a post event round-up and photo gallery.

The multi-stage, multimedia Halloween rager in the woods has posted the official party schedule.

Tickets for Skinful Halloween are now on sale and  they're going $10 off the general admission price and $20 off the VIP price for a limited time only.

The special sale ends on October 13th, so, place your order today.

It is time to start planning your Halloween costume because Skinful Halloween 2010 is coming.

I just took a peek at the event's official website, and they've announced who all will be performing at the tenth annual Halloween rager. Included on the lineup are Pimps of Joytime, the Rebirth Brass Band, Mini Kiss, Third World, Dub Island & The Dubplates, DJ Trail-Mix, Rocky Horror and many more awesome musical acts. Even more fun will come in the form of an African Chief Glass Eater, hay rides, jump castles, a mechanical bull, burlesque dancers, pole dancers and breakdancers.

Tickets aren't up for sale quite yet, but general admission tickets will be $50 and VIP will go for $100.

The organizers of Charleston's favorite Halloween bash have announced today via Twitter the venue for this years party Skinful Halloween 2010 will be held on October 23rd at the Brick House Kitchen on Folly Road.

The shindig, making its return to James Island, will feature the Rebirth Brass Band along with diverse line up of musical acts.

View the Twitter post, then get familiar with one of the biggest parties in Charleston by checking out our Skinful Halloween topic page.