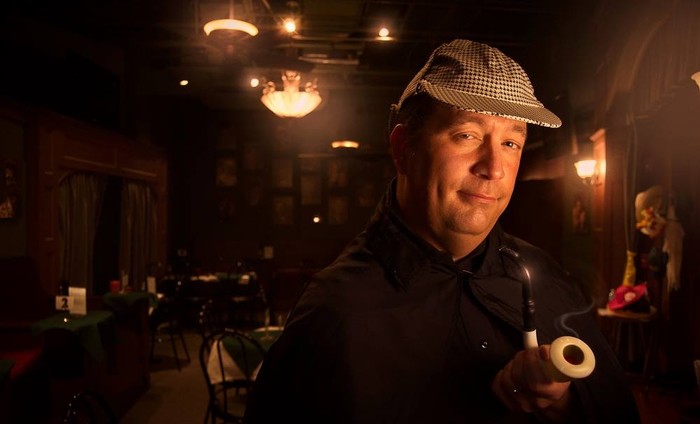 Another season of dinner theatre kicks off in North Charleston on Friday, September 20, with Sherlock Holmes and the Charleston History Mystery presented by The Black Fedora Comedy Mystery Theatre.

The interactive production is a hauntingly historical and hysterical whodunit recommended for Sherlock Holmes fans, Charleston history buffs, and adults out on the town. Dinner for the evening is catered by Embassy Suites and features an entrée of Trattoria Carbonara. Tickets are on sale until Tuesday, September 17.

When a member of the infamous Charles Townson family is murdered during a civil war shooting demonstration, the World's Greatest Detective, Sherlock Holmes, is called to solve the case. Townson’s own brother is clearly the shooter and is immediately arrested, but Holmes suspects there is more to this story; in fact, several centuries more. Join the Master of Logic himself on the journey to solve this Lowcountry case of mystery, history, spooks, and specters.  A journey where, without ever leaving their seat, audiences will explore Charleston's past, present, and other worldly; and where, should they choose to volunteer, audience members may actually play a victim, villain, or vile vision.

The Black Fedora Comedy Mystery Theatre opened its doors in early August of 2012. Owners/producers, Darryl & Sherry Wade, relocated to Charleston from Atlanta, Georgia, with nearly two decades of knowhow in the business of producing live, comic-mystery entertainment for corporate, college and general public audiences. Already highly ranked on Trip Advisor’s list of Charleston attractions, this new theatre is the place to go for family-friendly live theatre in a cozy setting. Their comedy-mystery shows are presented year-round at The Black Fedora Comedy Mystery Theatre and Shoppe at 164 King Street in downtown Charleston, with professional actors, volunteer audience participation and a la carte appetizers, desserts, and drinks. For more information, visit charlestonmysteries.com.

Sherlock Holmes and the Charleston History Mystery will be presented at the Charleston Area Convention Center Ballroom (adjacent to the North Charleston Performing Arts Center) at 5001 Coliseum Drive in North Charleston. The ballroom doors open at 7:00pm for dinner. Tickets are $40 per person. Group discounts are offered. Ticket price includes dinner, play, and gratuity. Tickets for just the play are available for $15. Parking is free. A cash-only bar will be available. To purchase tickets, contact Pam Smith at 843-740-5847 by Tuesday, September 17. For details on the 2013/14 North Charleston Dinner Theatre Series or information on additional programs and events, contact the City of North Charleston Cultural Arts Department at 843-740-5854 or visit http://bit.ly/culturalarts