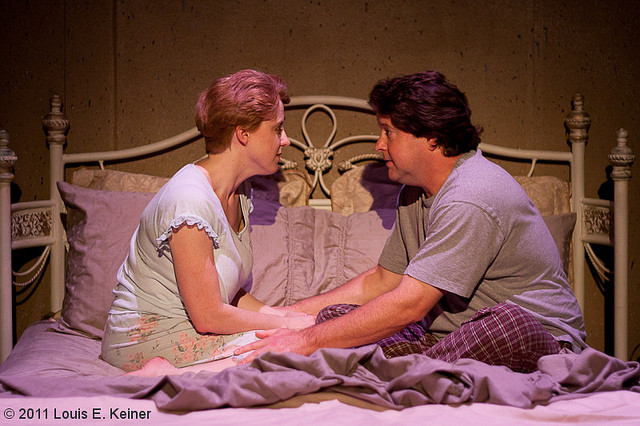 Louis Kleiner
Dinner With Friends was a production from the previous season of Atlantic Stage Theatre Company.

Atlantic Stage, the only non-profit professional theatre company in the Myrtle Beach area, announces its fourth season lineup of 5 plays and its first ever musical beginning September 8, 2011 running through April 15, 2012.﻿

Atlantic Stage is the only non-profit professional theatre company in the Myrtle Beach area. The theatre located at 79th Avenue North in Myrtle Beach and has a season full of award winning shows. Three of the productions will be produced with the Coastal Carolina Professional Theatre Training Program.

“We are thrilled at the exciting lineup of unique productions planned for the Myrtle Beach area this season”, said Thom Penn, Artistic Director for Atlantic Stage. ”Our fourth season promises to offer laughs as well as tears as we expand to offer productions of six shows, three of which will provide training opportunities for students in Coastal Carolina University’s Professional Theatre Training Program.”﻿

Tickets for the 2011/12 season are now available to renewing subscribers. New patrons and subscribers can purchase the new Flex Subscription or single tickets by calling the Atlantic Stage box office at 1-877-287-8587.  Single ticket prices range from $5-$25 at the door. Beginning on August 8th, tickets will be available to the general public at www.atlanticstage.com or by calling the Atlantic Stage box office at the above number. Discounts are available for students, seniors (55+), the military and groups. Student rush tickets are available for all performances 10 minutes prior to curtain at the Box Office for $5.00 (subject to availability).﻿

The Guys By Anne Nelson, September 8-25

Set just two weeks after the September 11 attacks, The Guys is based on the true story of a fire captain who lost eight men in the collapse of the World Trade Center and the editor who helps him prepare the eulogies he must deliver. This play about the enduring bonds of common humanity is recommended for adults and children ages 12 and older.

In this Tony winning hit, Bernard, a successful American architect living in a posh Paris apartment, has been deftly juggling three fiancées who are all flight attendants. It’s easy, with good timing and a bit of assistance from his reluctant housekeeper who plays romantic air-traffic controller. But, this supersonic lifestyle hits turbulence when his old college friend visits and each of his three fiancées change their flight schedule. Recommended for adults and children ages 12 and older. Produced in conjunction with CCU professional theatre training program.

Humorist Jean Shepherd’s memoir of growing up in the Midwest in the 1940s follows 9 year old Ralphie Parker in his quest to get a genuine Red Ryper BB gun under the tree for Christmas. The consistent response: “You’ll shoot your eye out.” You’ll recognize all your favorite scenes and characters from the beloved motion picture. A Christmas Story is destined to become a theatrical holiday perennial.

Bigfoot and Other Lost Souls Music and Lyrics by Mark Hollman, Story and Book by Adrien Royce, January 26 - February 12, 2012

Bigfoot and Other Lost Souls is a new musical comedy fable about a young woman who lost her baby when she didn’t even know she had one. Bernie accepts an assignment to write a documentary about Bigfoot and, while coming across tabloid sized characters, discovers the truth not only about the creature but also a few surprising things about herself. Produced in conjunction with CCU professional theatre training program.

By America’s great comic playwright, this memory play is set in Yonkers in 1942. Bella is 35 years old, mentally challenged and living at home with her mother. As the play opens, ne’r do-well son Eddie deposits his two sons on the old lady’s doorstep and hits the road. The boys are left to contend with Grandma, with Bella and her secret romance and with Louie, her brother, a small time hood in a strange new world called Yonkers. Winner of the 1991 Pulitzer Prize and Tony Award for Best Play. Produced in conjunction with CCU professional theatre training program.

When Greg and Kate move to Manhattan after 22 years in the suburbs, they find their careers at opposite ends of the success spectrum. Greg meets Sylvia, a street-smart pooch, in the park and when he brings her home, soon discovers that she has put his marriage in serious jeopardy. Sylvia is an intelligent comedy about a man, a woman, the aging process and the mutt who plops herself right into the middle of it all.﻿﻿