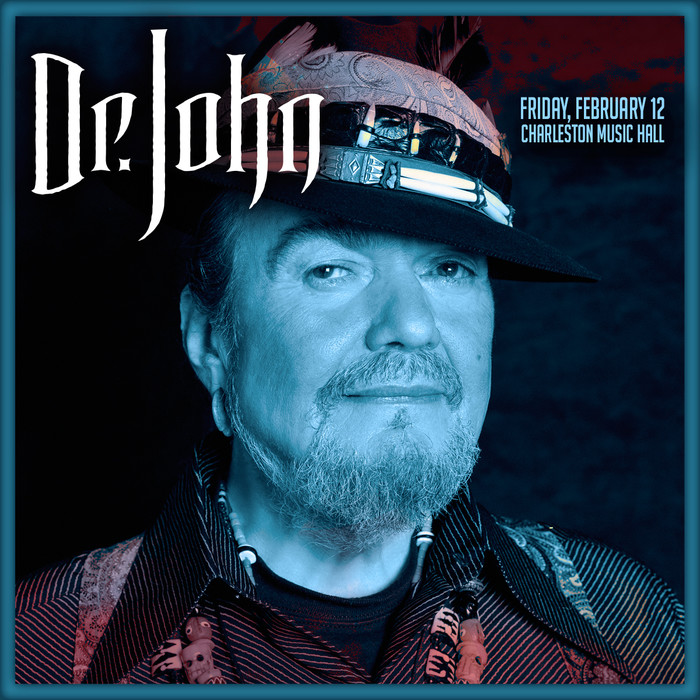 The legendary Dr. John is a six-time GRAMMY® Award-winning musician and Rock & Roll Hall of Fame inductee. Known throughout the world as the embodiment of New Orleans’ musical legacy, Dr. John is a true icon in American culture. His colorful musical career began in the 1950s when he wrote and played guitar on some of the greatest records to come out of the Crescent City, including recordings by Professor Longhair, Art Neville, Joe Tex and Frankie Ford. Dr. John headed west in the 1960s, where he continued to be in demand as a session musician, playing on records by Sonny and Cher, Van Morrison, Aretha Franklin and The Rolling Stones’ Exile On Main St. During that time he launched his solo career, developing the charismatic persona of Dr. John the Nite Tripper. A legend was born with his breakthrough 1968 album Gris-Gris, which introduced to the world his unique blend of voodoo mysticism, funk, rhythm & blues, psychedelic rock and Creole roots. Several of his many career highlights include the masterful album Sun, Moon and Herbs in 1971 which included cameos from Eric Clapton and Mick Jagger and 1973’s In the Right Place, which contained the chart hits “Right Place Wrong Time” and “Such A Night.” In addition to his six GRAMMY® wins (1989, 1992, 1996, 2000, 2008 and 2013), he has received six other GRAMMY® nominations over the years. In 2006, he was nominated for Sippiana Hericane, his Hurricane Katrina benefit disc. After Hurricane Katrina, Dr. John immediately stepped up to the plate with generous relief fund-raising concerts and recordings. In 2007, he was also inducted into the Louisiana Music Hall of Fame and the Blues Hall of Fame. In 2008, he released City That Care Forgot, winning a GRAMMY® for Best Contemporary Blues Album. His 2012 release Locked Down, with Dan Auerbach of The Black Keys also won a GRAMMY® for Best Contemporary Blues Album. In 2013, Dr. John was awarded an honorary doctorate from Tulane University alongside His Holiness the Dalai Lama. On August 19, 2014, Dr. John released Ske-Dat-De-Dat…The Spirit Of Satch on Concord Records, an album in tribute to another larger-than-life New Orleans legend: Louis “Satchmo” Armstrong. He honors Armstrong’s musical genius as well as his effervescent personality with 13 classic numbers drawn from various phases of the seminal trumpeter and vocalist’s five-decade career, with Dr. John joined by a stellar supporting cast, including Bonnie Raitt, Ledisi, the McCrary Sisters, Anthony Hamilton, Shemekia Copeland, the Blind Boys of Alabama, the Dirty Dozen Brass Band and trumpeters Nicholas Payton, Terence Blanchard, Arturo Sandoval, Wendell Brunious and James Andrews. After a half century of creating music for others and himself, Dr. John continues to write, arrange, produce and interpret with a passion that has yet to wane.