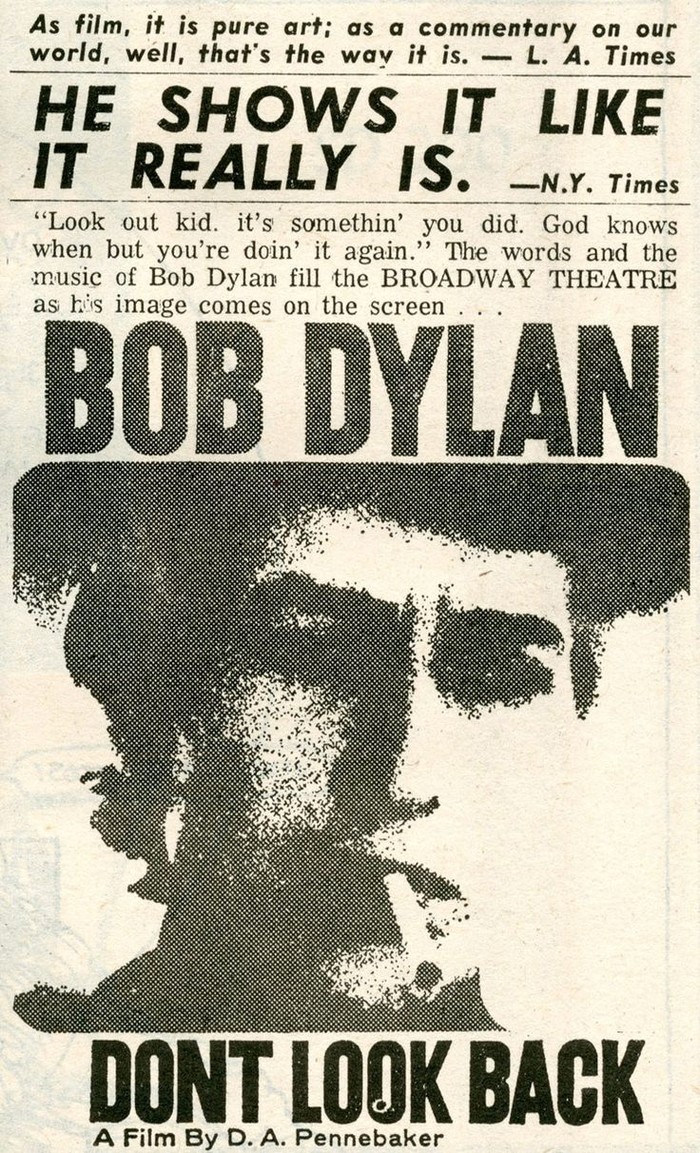 The black-and-white film chronicles Dylan and some friends, including Joan Baez and Bob Neuwirth (also the tour manager), as they travel on Dylan’s 1965 concert tour of England. What makes “Don’t Look Back” important musically is that Dylan performed alone with an acoustic guitar at each stop. Many in the audience were outraged and, from then on, he used an electric guitar and his shows included a backup band. Pennebaker catches Dylan as he plays piano, taps out poetry or lyrics on a manual typewriter, sings spontaneous duets with Baez, and socializes with a slew of young, star-struck British fans. Of course the director captures many moments of Dylan onstage, with performances of complete, now iconic, songs.

This Blu-ray 4K digital transfer looks exactly as it should. Originally shot on 16mm with home-made hand-held cameras and, mostly, available light, the film still has the low budget, seat-of-the-pants immediacy it had when it first came out. There are plenty of detailed, moody close-ups of impossibly young faces, especially those of Dylan and Baez, but also many grainy, low-contrast shots. That said, there are no noticeable imperfections throughout. The restored monaural soundtrack is excellent considering the relatively unsophisticated recording of the original. Even Dylan’s mumbling conversation is mostly understandable. The music all sounds great.

Then there are the extras – each worth your attention and time. They include: “Dylan on ‘Don’t Look Back,’” comprised of audio excerpts from a 2000 interview and bolstered by tour footage; “65 Revisited,” a 65-minute film directed by Pennebaker, containing unused footage from the 1965 shoot; “Greil Marcus and D.A. Pennebaker,” a 2010 video conversation between the director and the music journalist; “Subterranean Homesick Blues, 3rd version,” with Dylan holding the title cards to the recorded song, this version shot in the garden of London’s Savoy Hotel; “Additional Audio Performances,” from the tour; “D.A. Pennebaker: A Look Back,” a recent documentary featuring the director and three of his collaborators, Jim Desmond, Nick Doob and Chris Hegedus; “D.A. Pennebaker and Bob Neuwirth,” a 2015 conversation between the two long-time friends; “Snapshots from the Tour,” 25 minutes of never-before-seen outtakes from the film; a feature commentary recorded in 1999 by Pennebaker and Neuwirth; and a hefty booklet containing photos and an essay by critic and poet Robert Polito.

The 2015 interview with Patti Smith is particularly intimate and appealing. The multi-talented Smith very articulately recalls how Dylan and Neuwirth inspired and influenced her, beginning with her mother’s gift of “Another Side of Bob Dylan,” when she was a teenager. “That was it for me,” says Smith. “I’d found my guy!” She describes him as “Rimbaud alive,” and says “Don’t Look Back” encompassed everything for her at the time. She remembers meeting Neuwirth in the lobby of the Chelsea Hotel, where she had been living with photographer Robert Mapplethorpe.

After Neuwirth read some of Smith’s poetry, he told her she should be writing songs. “He took me under his wing … sensed something in me … saw a future in me.” She calls Dylan a great friend, whom she met after one of her performances at the Bitter End, a club in Greenwich Village. He had been in the audience and came backstage afterwards. Later, a photo of the two of them was published in the newspaper, which Smith credits as being a reason she was signed to record her first album. Dylan, she says, “was instrumental in me becoming myself.”