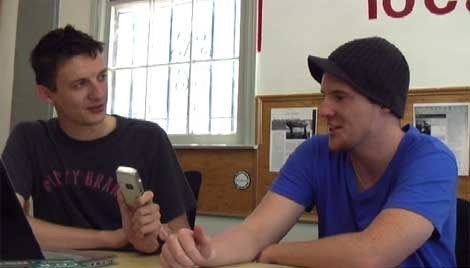 Image by Nate Mallard & Geoff Marshall/TheDigitelImage by twitpic.jpg Watch as Noah shows Geoff the wonders of posting to TwitPic -- apologies for the poor sound quality, we only had the minicam at the office.

We're back for our 19th installment, and this time we chatted with Charleston's newest geek celebrity: Noah Everett, founder of the Twitter user's mainstay that is TwitPic.

Instead of doing a weekly podcast on the same day, we're now doing one 'roughly' every week when an event occurs - the event this time being is that we had a celebrity in our midsts!

A recent transplant from the far reaches of the universe (Oklahoma), Noah's decision to move to Charleston is much owed to the movie The Patriot. We got word a few weeks back (via Twitter!) that he was moving to Charleston, and when he moved here just last week, we snagged him one night and lined him up for an interview.

If you want to know more about his move to Charleston, be sure to check out our past coverage.

But, enough with the written word and start listening! We should note though: What we like about ourselves here at The Digitel is our tendency to be somewhat liberal, and that definitely comes across here with a little profanity - mainly thanks to Geoff's perverse mind -- but we think if you 'get' us, then you'll find it a lot of fun.

And play the video (above!) which is a demonstration by the man himself, how to sign into and use his service!