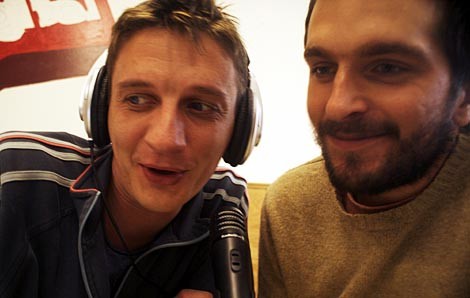 Image by Ken Hawkins/TheDigitelImage by 20090225-digicast.jpg So happy to be podcasting: Geoff Marshall and Austin Dandridge (right).

Now that we've nearly set up our new office at 125 Cannon Street, we though we ought round up the whole Digitel crew and do a podcast from the DHQ (that's short for the Digitel Headquarters).

And since we had no special guest (we're not counting ourselves), we though we'd have an informal cupcake-off between our three local cupcake powerhouses: Cupcake, Sugar, and Baked.

The verdict? That we don't want to hurt anyone's feelings. -- But now that the rest of the team is gone, you're stuck with the less editorially kind me. And I've decided to rank them by the leftovers I found in the fridge this afternoon: We had hardly any of Sugar's cupcakes left, with some Baked cupcakes, and a few more from Cupcake.

So there you have it. They were all tasty, but Sugar wins the prize.

But, enough typing. On with the lip flapping! Click play above, or download the DigiCast in the next paragraph.