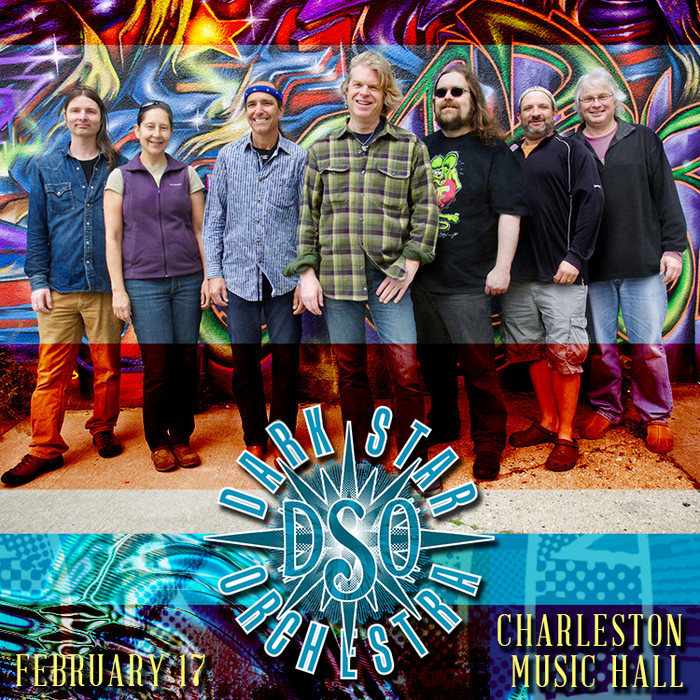 Presenting its critically acclaimed live show to Deadheads both young and old, Dark Star Orchestra is set to perform on February 17, 2016 at the Charleston Music Hall.

Continuing a long and strange trip since humble beginnings over a decade ago, Dark Star Orchestra’s determined commitment to ‘raising the Dead’ has drawn nationwide attention:

“Quite possibly the most talented and accomplished tribute band out there… they’ve definitely mastered their inspiration’s vagabond nature.” – RollingStone.com

“Recreates the Dead concert experience with uncanny verisimilitude… In fact, Dark Star Orchestra often sounds more like the Dead than the Dead sometimes did.” – Chicago Tribune

Critics aren’t the only ones singing Dark Star Orchestra’s praises.  Numerous original members of the Grateful Dead have played alongside DSO and have had this to say:

“A couple of times when I had my back to John onstage and he started to sing, I had this weird sense that it was Jerry.” – Bob Weir, Grateful Dead co-founder/vocalist/guitarist, frequent DSO guest

“Playing with Dark Star Orchestra is something that feels just exactly like it felt when I was playing with the Grateful Dead.” – Donna Jean Godchaux, Grateful Dead vocalist, frequent DSO guest

“There are moments where I can close my eyes and go back 30 years and have it be every bit as rewarding and satisfying. Dark Star is an amazingly legitimate representation of the Dead.” – Dan Healy, Grateful Dead sound engineer 1966 -1994, toured with DSO as their sound engineer from Sept – Dec 2008

Offering a continually evolving artistic outlet within the Grateful Dead’s musical canon, members of Dark Star Orchestra seek out the unique style of each performance era and offer their own interpretations and improvisations at each show.  Using entire set lists from the Grateful Dead’s decades of touring as a launching pad, Dark Star Orchestra recreates song for song performances straight from the set list of these historic shows.

While faithful improvisation is pinnacle, precision is of equal importance with DSO, which position the stage plot based on the year of Grateful Dead show to be performed, adapting phrasing, voice arrangements, and even arranges specific musical equipment for the various eras of Dead music performed. At the end of each performance, the band announces the date and venue where the original show just covered took place. Dark Star Orchestra dips into every incarnation of the Dead, so most fans can “see” shows that happened long before they were born.

Dark Star Orchestra isn’t a cover band. Its shows are not even meant as tributes.  What Dark Star Orchestra tirelessly strives for and achieves is a continuation of the spirit of what has now become over forty years of the Grateful Dead’s timeless music.