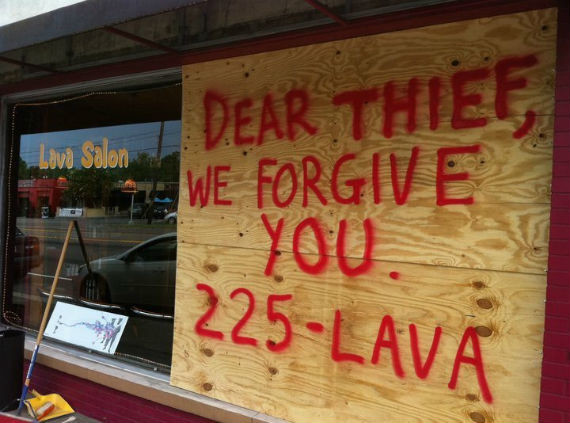 6:12 am on Friday July 1, 2011 | Posted by Katrina Robinson
Lava Salon deals with second robbery in just over a year (update: message to thief)

Update July 1: The Lava crew has written a message to the thief on the wood that's boarding up their window: "Dear Thief, We forgive you."

Oh and if the thief needs a haircut, Lava has conveniently written their phone number beneath the message.

What was their message to the thief from the June 2010 robbery? "Dear Thief, U left your brick!"

We'll keep you updated as more news about the robbery and the hunt for the thief comes out.

First reporting: On June 15, 2010, someone threw a brick into the window of Lava Salon (829-B Savannah Hwy.) and stole $100. Now, a little over a year later, yet another robbery has taken place.

But this time, the thief used a stone to break the window instead of a brick.

Geoffrey Richardson, owner of Lava, posted pictures of the damage on his Facebook page early this morning, and it wasn't pretty. But don't worry--Richardson and the rest of the Lava crew are keeping their chins up through this nasty incident.

Richardson and the rest of the crew are taking on an attitude of forgiveness throughout this ordeal. He stated that he plans on teaming up with some artists involved in the ChART Outdoor Initiative to create a work of art incorporating the broken glass from the window, the brick used in the 2010 break-in, the stone used in this morning's break-in, and the wood that will board up the broken window. The artwork will be auctioned off, with half of the proceeds going towards repair costs and the other half going towards charity.

Talk about making lemonade out of lemons--or, in this case, art out of broken glass.

In string of Asian restaurant robberies, one man pleads out