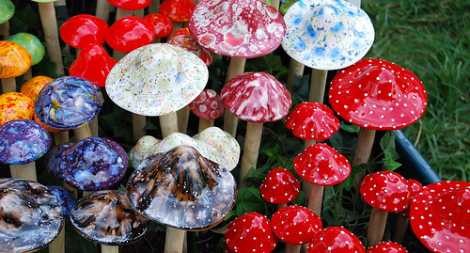 Image by Flickr user jsc.Image by 20080812shrooms.jpg We don't recommend the mushrooms, unless you're really looking for a new "experience."

A Three Gates Cattle Co. official says he suspects a newborn calf taken from their Mount Pleasant farm was just a prank, and that the thieves' real goal was to find psychedelic mushrooms. The calf was stolen Friday night from the company's farm on Venning Road.

Live 5 News has the story:

The newborn Belted Galloway was found Saturday, about three miles away from home, wandering around the Belle Hall subdivision.

It's a prank that will cost the mother cow her life because she doesn't recognize her calf and rejected it. Floyd says she's not hand-tamed so they can't milk her.

Live 5 has more on the fate of the calf, as well as the issue of animal cruelty, which is what some are calling this, because of the traumatizing effects on both the calf and the mother. Also, there's a $1,000 reward if you help authorities find out who did it.

And for some extra cow exposure, Three Gates Cattle has a photo gallery online.