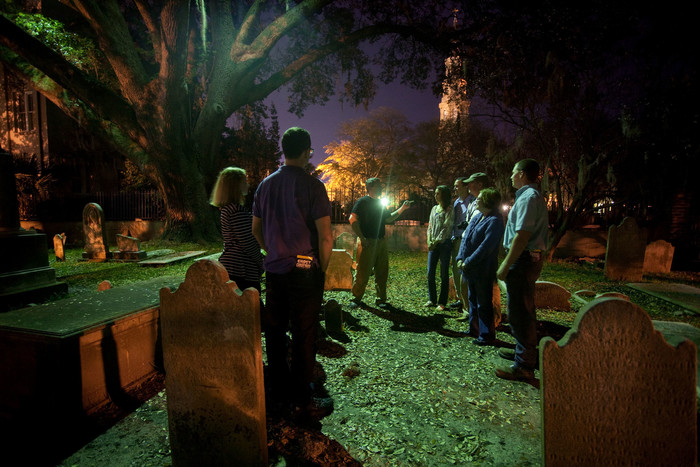 11:43 am on Wednesday September 23, 2015 | Posted by HAF Creative
Charleston’s Bulldog Tours in the Running for Best Ghost Tour in the Country

Charleston’s own Bulldog Tours has been selected by USA Today’s local experts as one of the top 20 ghost tours in the country. Now readers are casting their vote for the tour that will take the top spot.

Through noon on Monday, Oct. 12, readers can vote once a day for the 10Best Readers’ Choice awards, selecting the final winners of the best ghost tours in America.

Since 2001, Bulldog Tours has been entertaining visitors with tales of Charleston’s haunted past and dark secrets. Its tours give visitors access to buildings they wouldn’t otherwise be able to experience, including the Old City Jail, Provost Dungeon and the city’s oldest graveyard.

Featured on SyFy’s “Ghost Hunters” and the Travel Channel’s “Ghost Adventures,” the Old City Jail has a dark history that began in the early 19th century. In nearly 140 years, more than 14,000 people died on the jail’s grounds — either at the gallows behind the jail or inside the building itself. Those unsettled souls haunt the jail today along with the troubled spirits in nearby graveyards.

“It only makes sense that the country’s most haunted city would have the country’s best ghost tour,” said Bulldog Tours founder John LaVerne. “This is one more way Charleston’s history – albeit a haunted history – can shine on a national stage.”