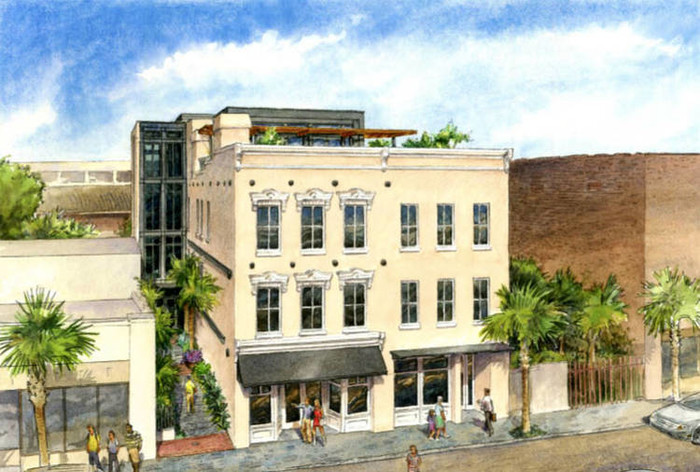 Image by PeopleMatter A rendering of the property in it's restored state.

The deal also marks the first time a major Silicon Valley firm has made such an investment in a Charleston company.

Nate DaPore, president and CEO of PeopleMatter, said North Charleston tech firm will use the investment to accelerate the next generation of the company’s products. He also stated that Morgenthaler’s investment reinforces Charleston’s potential to become a tech hub, and the venture capital firm might be looking for other opportunities in the Lowcountry.

Charleston Regional Business Journal has the good word on the investment; read it here.

Update October 25: The news that PeopleMatter is relocation is still official and there's not too much new out there.

The Post and Courier﻿ does have a followup report that notes a little bit on how the deal came to be and that the construction and renovation is expected to take more than a year. And the Charleston Regional Business Journal﻿ notes the dubbing of the term "Silicon Harbor."﻿

PeopleMatter has also posted a slew of documents ranging from press releases, to schematics, to a company fact sheet about the deal.

We'll get you linked up with more detailed reports as they come.

First reporting: Ever since hefty incentive deals were floated for an unnamed technology company to relocate their headquarters to 466 Upper King Street, there's been understandable buzz about just who that company is.

Well, we're gonna take a leap a bit and connect some dots and say it's likely PoepleMatter, a company that provide online tools for human resource needs.

Presently that company lists offices in Atlanta, San Francisco, and North Charleston — and the company has been tweeting up a storm about "The count down is on, FOUR HOURS until the secret is out. Can you feel the excitement building?"

And there's a mysterious blue sign that matches the company's logo color draped on the building — it's also worth pointing out that the deal will revitalize a building that is much need of repair.

The deal could be a game changer for Upper King that started to experience leading up to the Great Recession and has largely cooled since then — The Post and Courier﻿ reports that it could mean 200 more jobs and a investment of $18.8 million.

We'll be sure to keep you updated.