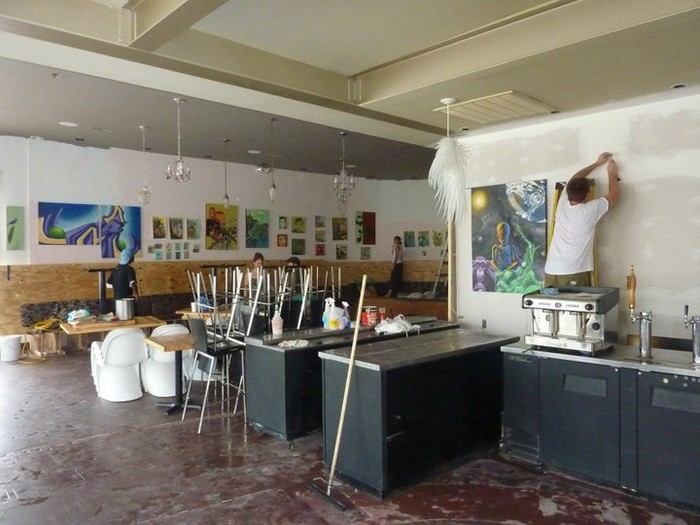 Image by Barsa The space as of August 23.

Update May 18: Barsa has been open for a few months now, and it looks as though owner/restauranteur Drazen Romic and chef Cole Poolaw are doing a killer job.

Barsa, formerly Shine, has a totally new feel and atmosphere, and it's thanks to Romic. The space has been completely remodeled, and the menu is chocked-full of yummy tapas. Poolaw is the second chef to take on Barsa's menu, and, according to the review in Charleston City Paper, he seems to be fitting in just fine, bringing a mindset focused on local and seasonal ingredients.

Check out the City Paper's full review here, and then stop by Barsa at 58 Line Street to try it out for yourself.﻿

Update January 10: The Charleston City Paper followed up and has a bit more on the re-opening.

The Charleston City Paper has filed their own blurb on the spot and has some additional remarks about the vision going into the space and notes that it'll probably be at least another month until they open.

And that looks like a pretty accurate assessment as the restaurant has recently posted more shots of the construction going on inside, and it looks like a good bit of time is needed.

For many the closure of Upper King Street's trendy restaurant Shine was a sharp pain, well it's been four months and it looks like there will soon be some comfort for you.

Construction and revamping of the space at the corner of King and Line streets has been happening and it will soon relaunch as another cocktail / tapas bar: Barsa.

I know, I'm trailing a bit behind the grapevine on this one, but there's been no press on it yet, so I thought I'd bring you in the loop.

Currie McCullough over at 53 Cannon said back in early August they'll be opening in early September. We've dropped Barsa a note to get some more details and an updated date, but one would have to image it's very soon.

Oh and if you liked the food from before, you'll be glad to know that chef Shay MacDonald is still onboard.

Hopefully, they have a fun launch event in store.

I'll share what we hear back, in the meantime while they have no website yet they have kept the old Facebook profile alive and rebranded it.

Update September 12: And, yes, mere moments after hitting publish I found the Charleston Scene piece with chef MacDonald (read that here), but it has more to do with the spirit of the relaunch and few details.