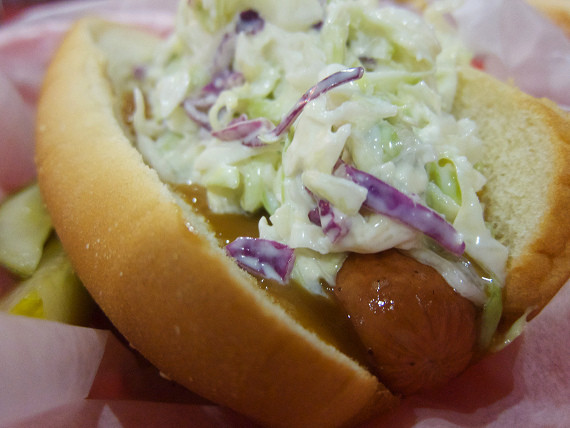 Update September 13: Located on the corner of Avondale Avenue and St. Andrews, Jack's Cosmic Dogs has opened their newest store within minutes of downtown Charleston, the West Ashley athletic fields and Avondale.

This is the third Jack's Cosmic Dogs to open in the area.

Jack's Cosmic Dogs received national fame when founder Jack Hurley and his Cosmic Hot Dogs were profiled on the Food Network's The Best Thing I Ever Ate with Alton Brown who said, "...Jack's serves up the best hot dogs I've ever had. Ever!"

If you're a hot dog fan and you've haven't yet tried one of Jack's far-out dogs, have a look at the far-out menu and hightail it over to one of their locations. You won't be disappointed.

First reporting: Jack's Cosmic Dogs announced today that they will open a third location at 817 St. Andrews Boulevard on Highway 61 in West Ashley. Opening date is set for early to mid-June.

Construction is underway on the new building, previously the Busy B Florist near Ryan's Steak House.

Jack Hurley, Intergalactic Captain, reported that the Avondale neighborhood is "perfect for our concept of comfort foods, soft-serve ice cream, and nostalgic fun."

In a partnership with Dave and Chrissy Lorenz, Jack's Cosmic Dogs will be dishing up the dogs by early summer. Located on the corner of Avondale Avenue and St. Andrews, Jack's will be minutes from downtown, the West Ashley athletic fields, and the Avondale neighborhood by bike or walking.