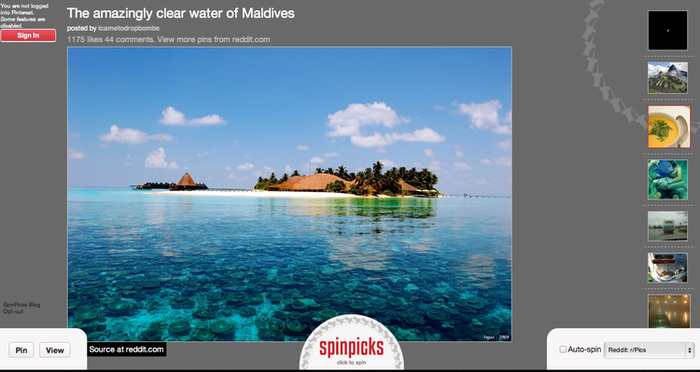 "Do you love to pin? Then you'll love to spin!"

Update March 20, 2012: The drama over SpinPicks (formerly SPinterest) has settled, the app is back in the Google Play library (under the new name) and is better than ever.

With tons of added features, like the ability to spin YouTube videos and other popular photo-centric sites, SpinPicks has gained some national attention thanks to The Huffington Post and thier article "11 Pinterest Apps and Tools To Enhance Your Spinning Experiance"

While the 11 suggested apps and tools aren't numbered from best to not so best, SpinPicks is the second app mentioned on the list.

Check out the full list of Pinterest apps and tools over at HuffPo, and make sure to give it a spin by signing up for the webapp beta or downloading the application for your Android device.

Make sure to read our first report(s) below.

Update March 11, 2012: Well, it wouldn't be a great start-up story without some drama. The app formally known as SPinterest has been renamed and is undergoing some other minor tweaks.

Besides some expected bugs and ongoing tweaks to the pretty nifty service, SPinterest was off to a great start. The application was launched on the Android platform as has had, "8,836 total installs (users) and 5,682 active installs (devices) of the free version of the app." and as noted on their blog, that, "users pressed the Spin Wheel 110,000 times."﻿﻿

But with success sometimes comes setbacks, and the biggest blow to any app is being pulled off of the marketplace. Over at the companies blog they explain:

The app creators, Heather Solos and Paul Reynolds are hard at work on rectifying the issue, which they believe is caused by the name being too close to Pinterest. While they haven't heard any word back from Google as to the exact reason, they have currently re-branded the service name in hopes of having the issue resolved.

From here on out, SPinterest will now be known as SpinPicks. Which seems to be a better name since the application and service does more than just lets you spin through Pinterest posts.

Make sure to read below for the first report and head on over to SpinPicks.com to sign up for the beta of the webapp and get notified on when the app is back in the Google Play Market.

First Report March 5, 2012: It started only a couple weeks ago, the idea coming from Charleston's home-skill blogger and published author Heather Solos: A better way to Pin.

Luckily, the tech community in South Carolina is rather close with one another. The Myrtle Beach tech folks and our Charleston counterparts go to each others' conferences, talk on Twitter, email,

and share advice daily. This is where one of TheDigitel Myrtle Beach co-founders comes in. Paul Reynolds is a experienced local developer who has had his hand in creating many games and programs for other companies and has developed several apps himself.

Solos shared her idea with Reynolds for a Pinterest application where users can press a button and spin in random Pins from the popular website - a fun new way to discover cool and interesting Pins and to find new users to follow.  A few short weeks later and SPinterest was born.

The idea was unique, and since Pinterest is still a relatively new service, not many third party applications have been developed for it. The problem, however, is there were no real developer kits for Pinterest. So, Reynolds worked day and night for over a week developing the web interface and Android application.

The Android application has just been released this past weekend, and actually fills a big hole for the Android platform; unlike the iOS (iPhone) platform, there is no official Pinterest app, and the third-party applications thus far fall short. Don't fear iOS users--in the next few weeks an iOS version of SPinterest will be available.

If you would like to take this new service for a SPin, then sign up for the website beta version, or if you have an Android phone, you can download the application here, which already has a total of nearly 500 downloads.

"Pinterest lets you organize and share all the beautiful things you find on the web. People use pinboards to plan their weddings, decorate their homes, and organize their favorite recipes. Best of all, you can browse pinboards created by other people. Browsing pinboards is a fun way to discover new things and get inspiration from people who share your interests.﻿"

Find out more by going to Pinterest.com.

Did you know the Myrtle Beach technology and start-up scene is growing every day? See past stories on our topic page.