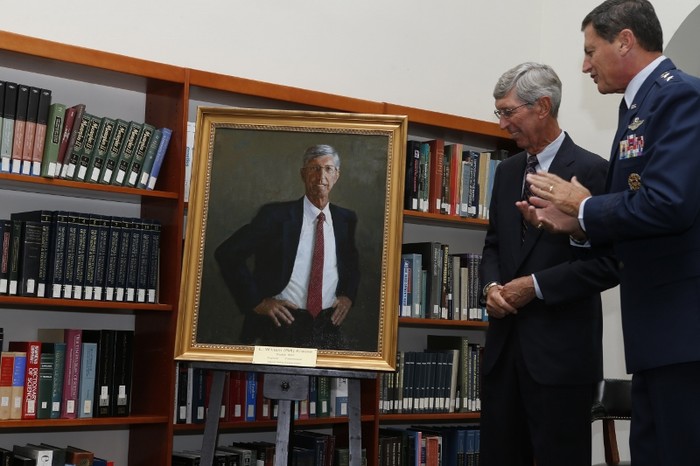 9:44 am on Wednesday November 6, 2013 | Posted by The Citadel
Bill Krause is now among most distinguished alumni in The Citadel’s gallery

CHARLESTON, S.C. - “Why not help achieve excellence in the education of principled leaders?”  That was one of the thoughts Bill Krause shared while speaking to a standing-room-only crowd of alumni and staff in The Citadel’s Daniel Library. The group gathered Friday, Nov. 1, to witness the unveiling of a portrait of Krause, which is now hung in the college’s elite Distinguished Alumni Gallery.

Throughout their lives, Gay and Bill Krause, ’63, have generously demonstrated that philanthropy and service to others are essential elements of principled leadership. Earlier this year, the Krauses committed to giving $9.1 million dollars to support, advance and endow the college's leadership development curriculum. These activities are ingrained in The Citadel educational experience and are led on campus by the Krause Center for Leadership and Ethics, which was created in 2003 with a $2 million gift from the Krauses. The new gift places the Krauses among the top three lifetime donors in the college's history.

Krause, also named The Citadel’s Alumnus of the Year by the Citadel Alumni Association, was nominated for inclusion in the Distinguished Alumni Gallery by fellow classmate Ben Legare and approved by the school’s Board of Visitors. The gallery is limited to graduates, who, through their achievements in the years following graduation, have brought honor to the school in any field of civilian or military endeavor.  Highlights of the criteria for inclusion in the gallery comprise categories such as alumni killed in battle; alumni who demonstrated a major act of bravery for civic good; exceptional achievement in the realms of art, business, government, publishing, science or theology; and major benefactors.

Krause graduated from The Citadel in of 1963 with a degree in electrical engineering. He received an honorary doctorate of science in 2000. He is president of LWK Ventures, a private investment firm specializing in mentor capital. He is perhaps best known for stewarding 3Com Corp. through its high growth years in the 1980s as president and CEO, and subsequently as chairman of the board through 1993 when he retired. Krause’s leadership transformed 3Com from a venture capital start-up into a $1 billion+ publicly traded data networking company with operations worldwide.

Krause reinforced that the family’s actions supporting The Citadel are a team effort shared with his wife, L. Gay Krause.  A former teacher, counselor and middle school principal in Mountain View, Calif., she has been instrumental in developing and leading the Krause Center for Innovation, a teacher training center at Foothill College in Los Altos, Calif.

The portrait was painted by artist David R. Darrow of San Jose, Calif. Darrow has studied art and been a painter since 1977.