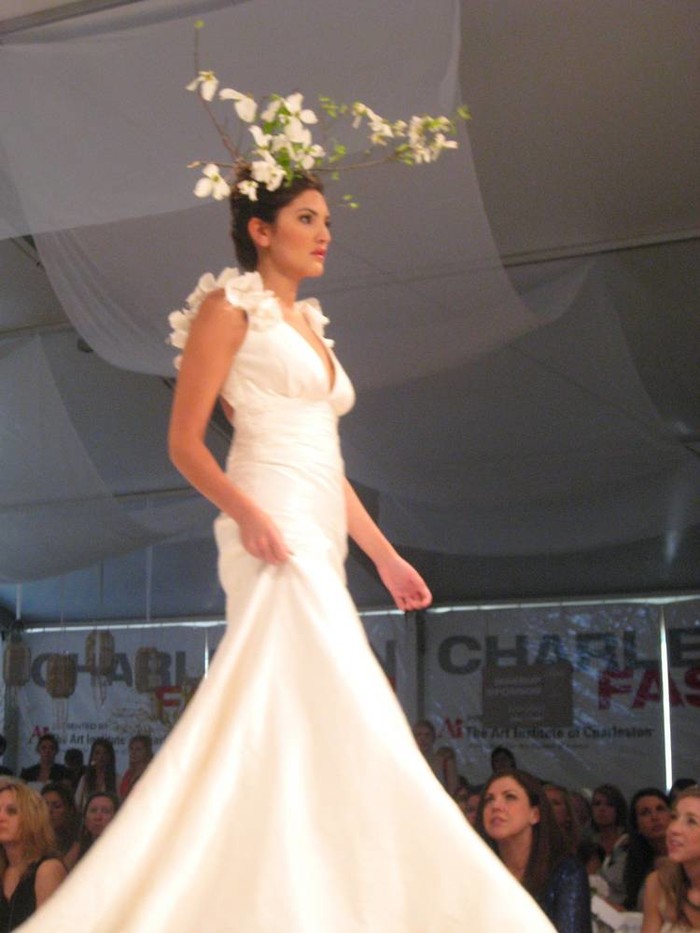 Different from the previous shows this week, there was no Style Lounge and the main tent housed the participating vendors along the inside perimeter of the tent. Attendees milled around the tables, drinking mimosas and nibbling on mini cupcakes from Sugar Bakeshop while waiting for the show to start. Charleston Virtuosi, a trio of violin, viola and cello were the pre-show entertainment. If it’s a classical song ever heard at a wedding, they played it or probably could.

The show seemed to get off to a slower start. Seats were left empty, the energy seemed low, and there were some technical difficulties with a video as well as a model cue.  In brief, YoYo Designs had pretty wispy details that extended beyond the dress hem, Alena Fede’s line was fun and felt like it was influenced by Madonna’s ‘Like a Virgin’ video with the multi-strand pearls draped over the shoulder, and Modern Trousseau showed model after model of Audrey Hepburn look-a-like’s, with oversized sunglasses and sleek up-do’s. Maybe it was too early in the day (noon), or that the Fashion Week crowd was exhausted from this week, but the bridal show so far wasn’t drawing the applause or catching the attention of the crowd.

But then came the second half and everything changed. Belle Couture Bridal & Kira Elizabeth Designs showed messy braids and feathery eyelashes with bright pops of color that gave the line a little something extra special. The bridesmaid’s dresses featured punchy colors that could be worn right off the runway. Local boutique, White, revved up the crowd with both their music choices (One Republic, Bruno Mars, The Verve) and designs. Models has relaxed tousled hair, allowing the white dresses to be the focus. It was clear that this boutique knew its audience under the tent and in turn, showcased a range of styles within the collection to grantee bookings for the next couple of months. And so will Maddison Row and Bella Bridesmaid. Red lips, veiled headpieces, black accents, and warm grays adorned the models in both the bridal and bridesmaid dresses alike as they walked to a soundtrack of songs by The Black Keys. Whether conservative or fashion-forward, these boutiques showed that they have a dress for an assortment of brides. The standout piece of the collection was designed by 2010 featured designer, and newly brunette, Carol Hannah. A black-swan looking wedding gown caused a round of applause as it appeared. Now the girl that likes the little black dress can even wear one down the aisle.

The featured designer of the Bridal Show and season two Project Runway alum was Heidi Elnora. Dresses with lace detailing, raw silk, satin, and feathers floated down the runway, but it was the floral accents that garnered interest and proved to be dramatic and eye-catching. What initially appeared to be a flower worn in the hair by one model, turned into a multiple flowers, then flowers with branches, until finally the last model had a floral headpiece that was a lesson in ikebana.

Black is the new white and if you want to rock feathery eyelashes or dramatic head pieces go right ahead. It’s your wedding day.