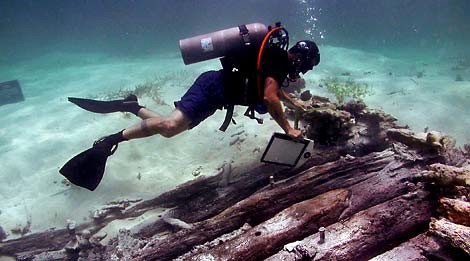 6:01 am on Friday December 5, 2008 | Posted by Ken Hawkins
Recovered 1841 shipwreck could be linked to Lowcountry's slave trade

Image by Search for the Slave Ship Trouvadore / NOAAImage by 20081205-trouvadore.jpg The hull remains of the so-called "Black Rock Wreck" were measured and compared to the dimensions of known shipwrecks off East Caicos.

Recently rediscovered historic slave ship Trouvadore may be another piece of the Lowcountry's ties to an illegal slave trade leading up to the Civil War.

NOAA writes about the wreck and the rediscovery:
The Spanish vessel Trouvadore was participating in the slave trade, outlawed in the British Indies, including the Turks and Caicos Islands. In 1841, after the vessel was grounded on a reef, Caicos authorities arrested the crew, and most of the 192 African survivors settled on Grand Turk Island.

Keith and Carrell believe the African survivors of the Trouvadore are the ancestors of a large portion of current residents in the Turks and Caicos Islands. For example, traditions on the Islands have a recognizable African origin. The Turks and Caicos National Museum is recording these traditions through oral histories and is educating the community about their ancestral history.

While The Post and Courier explores the possible connection to the Lowcountry:
Some of the ship's captives might have been on their way to slavery in Charleston. People who took in survivors might well have been the former slaves of Lowcountry plantation owners. The hints of connections to people and events here in the years before the Civil War beguile the archaeologists who just identified the historic wreck.

The Amistad is, perhaps, the most famous of the ships linked to an illegal slave trade in the Lowcountry.