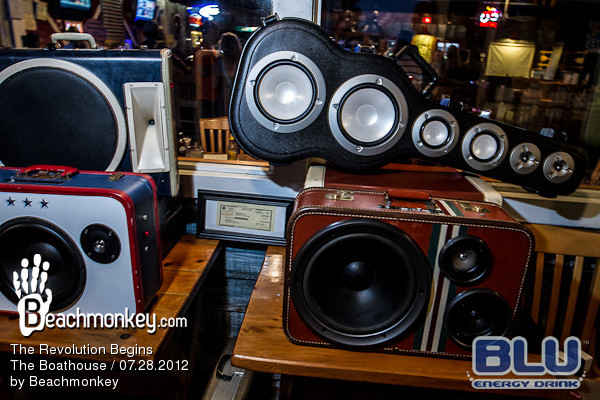 Update August 3, 2012: DomeCandy's Revolution Begins party was a success at The Boathouse despite the dark skies and rain for most of the day just hours before the event.

Below you'll find video of the headlining act for the night, Machines Are People Too shot by the ever-so awesome Surf Skate Music Culture. Entertainment was also provided by the North Myrtle Beach High Schoolhouse Rock Band, a band that started out as an after school club and is now an actual class offered at NMB High.

Additionally, the local party-photogs of BeachMonkey.com were there as well and have lots of photos of the fun. So hop on over here to see those (you have to have an account though).

And you might have missed our "Inside the Lab" feature on what goes into making one of DomeCandy's one of a kind RockBoxes, but have no fear you can find that here.

Enjoy the video by SSMC, read all about what great charity the part was for below the video.

Check out the official press release from the guys at DomeCandy

DomeCandy, the local company that makes kick-ass boomboxes from recycled suitcases is throwing a party at The Boathouse to benefit the Grand Strand chapter of the Surfrider Foundation.

The Boathouse event is being called an, "Art & Music Exhibition to raise awareness & funds for the Surfrider Foundation." Besides the great scenery of The Boat House, cold drinks and great food prices, the event will feature live music from Machines Are People Too with special guests Of Good Nature. Additionally there will be live art projects going on through out the evening.

Also while you're on Facebook, make sure to check out DomeCandy's awesome wares on their page.