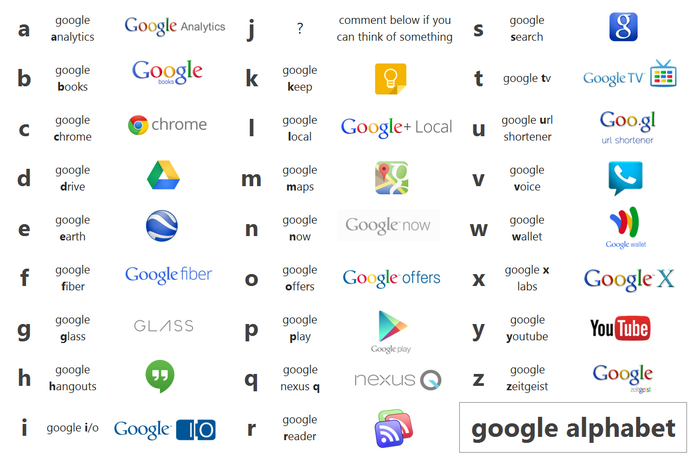 When the word Google entered the Oxford English Dictionary in 2006 it was widely seen as proof that the chirpy US tech firm, with its primary-colored logo and "do no evil" mantra, had officially captured the zeitgeist of the internet age.

The word alphabet - well that's been around a little longer. As have Google's ambitions for growth - Wikipedia lists 182 acquisitions alone, in addition to the company's core business.

Mr Page admitted that from the outset, some of Google's interests "might seem very speculative or even strange" for the firm.

"We are still trying to do things other people think are crazy but we are super-excited about," he said.

More detail of the surprise restructure is expected in the coming weeks, but here's a brief guide to Alphabet's core areas of activity so far - though not in alphabetical order, just to keep you on your toes.

Google itself will continue to exist as a subsidiary of Alphabet under the leadership of a new CEO, but long-term Google exec, Sundar Pichai.

It will include Google's most obvious - and profitable - internet outlets such as search, Maps, YouTube, Chrome and the Android mobile phone platform. In addition to its acquisitions, Google has two investment arms - Google Ventures and Google Capital.

Google Ventures claims to have made more than 300 investments alone, with recipients including Uber, Periscope, and Fitstar (which has since been bought by fitness tracker form FitBit).

"With fears mounting about Google's wealth, power and knowledge of every aspect of our lives, you can understand why it wanted to give that assurance," said BBC Tech Correspondent Rory Cellan-Jones.

Head to the source at feed.pk
Advertisement