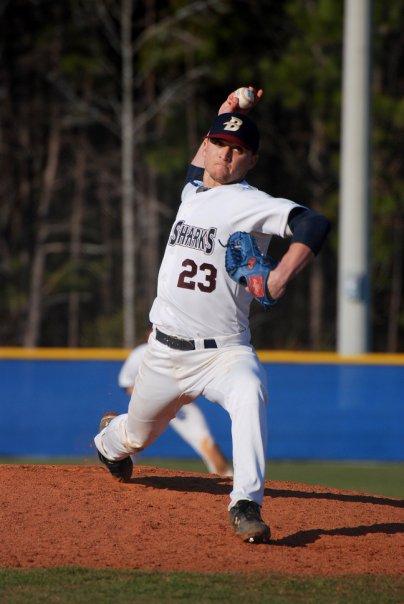 With the start of the University of South Carolina Beaufort’s Baseball season nearly
a week away, Coach Sofield and the #18 ranked Sand Sharks will be
looking to improve on their exit in the first round of the NAIA regional
tournament last year.

The
loss of power hitters Jeremy Webb and Brandon Collins to the line-up will prove
difficult holes to fill, as will the losses of starting pitcher Spenser Cromer
and shortstop Zach Rosetti.

(For details on the start of the season on February 5 and game dates, head here.)

Yet the team’s confidence in the camp
remains high, here’s a few reasons why:

Fans
and coaches have questioned Jackson’s hot-headed demeanor at times, but what
can’t be left to question is the outfielder’s results. In 2009, his first year
at USCB, Jackson was a fixture in the line-up averaging .366 with 13 doubles
and 30 RBI’s in 172 at-bats. Last year, he finished with .410 average with more
hits (66), doubles (22), RBI’s (37), home runs (3), and stolen bases (6) in
eleven less at-bats. If Jackson keeps with this kind of improvement, it’ll be a
huge boost to USCB.

Martin
hit .430 and .432 during his two years as a starter at Garrett Community
College, leading his team in doubles, RBI's and walks his final year. Having
transferred to USCB in the summer, Martin will add some much needed muscle to
the power-depleted lineup, and could fill in either behind the plate, at first base, or
as a DH.

Although only seeing limited playing time early,
Torres caught fire towards the latter part of the season, getting on base in at
least once in 23 of his last 25 games played en-route to a team-best .458
average and the 2010 USCB MVP award.

If
USCB hope to improve on their first round exit from Regional’s last year, it’ll
all start with Adam Miller. Voted the 2010 season’s “Pitcher of the Year” by
his teammates, the 1st Team All Sun Conference pitcher had a
team-best 3.73 ERA including a 1.93 ERA in the post-season. “Adam Miller is as
good as they come” said Coach Sofield at the start of the school year, “I
believe he can pitch at the next level.”

A
summer transfer from the 19th ranked SEC-power house Auburn
Univeristy, big things are expected from Dexter Price this year. The right-hander
had an ERA of 6.04 and 4.38 in his freshman and sophomore years respectively,
totaling seven wins in all. His coaches say he’s battling a minor injury at the
moment, but is expected to return before opening day.

A
few more to keep your eye on:

#5
R.J. Neal, Jr., Outfielder: Although the outfielder smashed 44 RBI’s last year, he
tends to struggle with consistency at times.

#23
Kyle McCullough, Sr., Pitcher: The flame-throwing pitcher from Miami was
rock-solid from the bull-pen last year, allowing no hits on nine different
occasions. His good form will see him move into the rotation this upcoming
season.

#44
Mike Heesch, Jr., Pitcher: The 6’6” left-handed pitcher is a transfer from the
University of Illinois—Chicago. The two-year letter winner is expected to start
for the Sand Sharks this season.