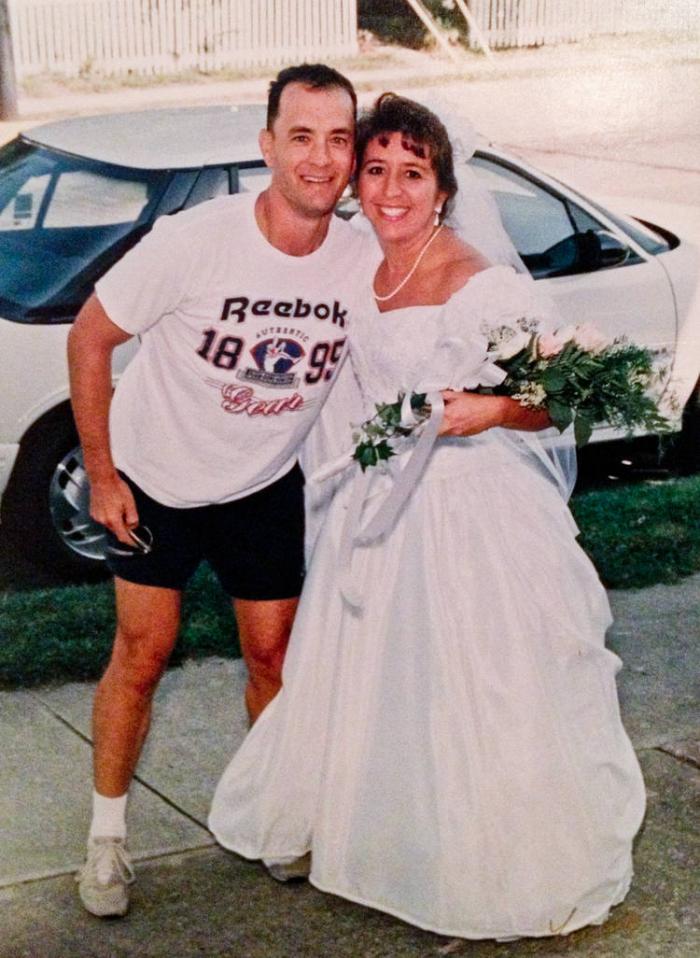 Forrest Gump was filmed in Beaufort, SC, in various locations from August-October of 1993, making this year the 20th anniversary of Tom Hanks’s active presence in our little town.  He was known locally for his friendly disposition. In fact, Mr. Tom Hanks was not above crashing a wedding! The following account was written by Mary Dunning Chapman about her 1993 wedding at the Carteret Street United Methodist Church featuring her unexpected meeting with a movie star:

“My bridesmaids and I were walking around the side of the church getting ready to ‘walk down the aisle’…..I saw this light blue Lincoln at the stop light just down from the church, and there was a guy hanging out waving and honking the horn. I didn’t think anything of it…..by the time we got to the front of the church, the car pulled up, and this guy hops out and runs up to me! He says, “Hey, I’m Tom Hanks, and I just wanted to say good luck!” He hugged me and kissed me on the cheek!! I was shocked but managed to get the photographer to snap a great shot. The rest of the wedding was kind of a blur!! Everyone talked about it at the reception and pretty much all week long, according to my parents. When we got back from our honeymoon, my mom told me that the guy that drove the car that day, Paulie, found my picture in the paper and called them. He said that Tom thought it was cool that he did that, and he wanted to get a copy of the picture! We called the photographer and got the pics and called Paulie and met up with him. We signed a copy for Tom and asked Paulie to give him another one to sign for us. Within a week, we got our signed picture back…..it said, “Congratulations! The only bride more beautiful was the one I married….I’m just sorry I missed the ceremony! God Bless, Tom Hanks.” Yeah!!! I’ve gotten lots of calls and read lots of articles about it since then…..It was when he was filming Forrest Gump.”

In the movie, after Forrest was rejected by Jenny, he started running…all over the country. Two of these scenes were filmed on U.S. Highway 21 on our local bridges, the Woods Memorial Bridge and the Chowan Creek Bridge. It may have confused visitors at the time because a sign was put up on the Chowan Creek Bridge for the filming. It read, “Welcome to the Mississippi.” (A local joke claims that visitors exclaimed, “I didn’t know the Mississippi came this far East!”) With all of these running scenes and military scenes, Mr. Hanks was required to stay in perfect shape, which explains his workout clothing in the photograph.

A woman wants to look her best if she happens to meet a celebrity, and this was the ‘best day of Mary’s life’- for two reasons! She  later became a school teacher in Charleston, SC, and now lives in Florence.